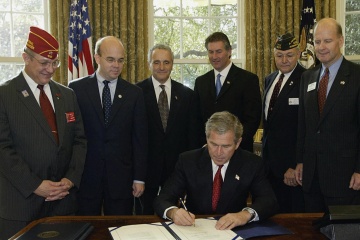 Active-duty military personnel include officers and enlisted soldiers, both full-time and reserve, working for any of the U.S. armed forces. They serve in the Army, Navy, Air Force, Marine Corps or Coast Guard, and they have to pay taxes like everybody else.

Their living and working situations and income types, however, might be very different from those of the average taxpayer (the differences between civilian taxes and military taxes are significant enough to warrant "military edition" tax prep software). There are qualification criteria for certain tax breaks and credits that make sense for civilians but would be impossible for some soldiers to meet. Terms like "work" and "home" can get confusing when you live on a military base. Figuring out what counts as a "work-related travel expense" can be an arduous process when you're stationed overseas.

Even "income" is a little hazy. Does an enlistment bonus count? What about in-kind benefits like health care and legal assistance? Do you count your housing allowance? Do you count anything at all when you're in a designated combat zone?

Employees of the armed forces can receive myriad types of "pay" that civilians typically don't, but they also earn plain-old cash money. Soldiers take home a set income for their work from which portions are withheld for Social Security and Medicare. That's "basic pay," and in almost all cases, it's included in gross income for taxation purposes [source: Liberty Tax Service].

Some of the other types of taxable income include [sources: IRS, GlobalSecurity.org]:

And then there are the exclusions – the cash money, benefits, goods and services not included in gross pay for income-tax purposes. (Some can be included for other purposes. Keep reading.) Some of these nontaxable payments include [source: IRS]:

That last one, combat pay, is noteworthy. Combat pay is the basic active-duty pay earned by soldiers serving in a designated combat zone (see the IRS's list of current combat zones). That means military personnel stationed in, say, Afghanistan, Jordan or Somalia may end up paying almost no income tax at all. Of course, this is the U.S. tax code, so there are some complexities in the rule.

Military veterans (those who have served but are no longer on active duty) pay taxes on their retirement income from the military, but not on any disability payments. Most veterans' benefits, including home-construction grants for wheelchair access, payments to survivors and combat bonus pay, are tax-free [source: Liberty Tax Service].

If you're a soldier serving in a combat zone, your income won't be taxed.
Akram Saleh / Getty Images

Soldiers' salaries are not taxable while they serve in a combat zone or while they recover from injuries obtained there [source: Liberty Tax Service]. This exclusion also applies to accrued-leave, re-enlistment bonuses and student-loan repayments. If a soldier receives payment for an idea or innovation developed in a combat zone, it's excluded from gross income [source: Liberty Tax Service]. Basically, if it occurs in a designated combat zone, it's tax-free.

There are a couple of exceptions. Commissioned officers have to pay tax on the amount of combat pay they earn above the highest enlisted salary [source: Bell]. Also, the exclusion only applies to soldiers stationed in a combat zone. Soldiers in a combat zone while on leave from a noncombat area, or merely travelling through or over the zone en route between two noncombat areas, are not eligible for the exclusion [source: IRS].

Tax-free status for a person's primary income source seems like a great thing, and it usually is. But sometimes in taxes, more income is better, and soldiers serving in combat can find themselves at a loss for certain benefits. So there are times when the IRS allows soldiers to declare their combat pay but still doesn't tax it. For example, combat pay can be included as income for the purpose of determining limits on IRA contributions but still excluded for purposes of taxation [source: IRS].

Circumstances are similar with the earned income tax credit (EITC). This credit allows low-income earners to get back some portion of the tax they've paid on their income. To qualify, their earnings need to fit within the EITC bracket. Many military personnel qualify for the credit based on their income, but the combat-pay exclusion can reduce their income to below the EITC minimum amount. As with IRA contributions, then, active-duty military are allowed to count their combat pay for purposes of qualifying for EITC while still excluding it from taxable income [source: Bell].

The IRS has established some military-specific guidelines for some other deductions and credits, too.

In Case of Death

If a soldier dies in combat, from injuries acquired in combat, or in a terrorist or military action, any taxes due for the year of death are forgiven, and any taxes already paid for that year are refunded. Tax debt from previous years may be forgiven as well [source: IRS].

Deductions and Exclusions for Active-duty Military

Like civilians, employees of the armed forces can deduct expenses for work-related travel – the costs associated with being away from home on business. For members of the military, though, this may play out a little differently, because "home" is not necessarily their permanent residence (a family home, for example); it's their permanent duty stations. This means soldiers stationed overseas can't deduct the costs of living and working there, even though in practical terms they are travelling for work (and may have to pay state income taxes in their home state, not that of their permanent-duty station) [sources: Ewing, TurboTax].

Reservists can deduct the expenses of traveling for their military job, but only if they have to travel more than 100 miles (161 kilometers) from home and/or they're traveling for reserve duty on a day when they would normally be working their civilian jobs [source: Ewing].

Uniform-upkeep expenses are only deductible if the uniform can't be worn outside of work or if the expense is related to an item that is not a piece of clothing, like epaulets and swords [source: IRS]. Otherwise, it's considered part of the soldier's wardrobe, like a pair of jeans.

There are also cases in which the unique circumstances of military life can hinder the ability to meet tax-relief requirements, as with the capital gains home-sale exclusion. Homeowners who sell their primary places of residence are allowed to exclude up to $250,000, and up to $500,000 for married couples filing jointly, of the sale price from capital-gains taxes. To qualify, they need to have been living in the home for at least two of the previous five years. For soldiers, this requirement can be problematic, as they tend to move around so much. For those stationed more than 50 miles (80 kilometers) from their homes or those required to live in government housing, the IRS waives the two-year requirement for up to 10 years [source:IRS].

They also get some extra room with the child tax credit, which typically only applies if the child lived with the taxpayer for at least half of the tax year. Separation due to military service is set aside in determining the time of residency for purposes of claiming the credit [source: IRS].

Most states that collect income taxes (seven didn't at the time of publication) follow federal tax rules regarding exemptions for basic pay. There is some variety when it comes to other types of income, like survivor benefits, retired pay and severance, and regarding the filing of separate returns for nonmilitary spouses. See Military.com: State Tax Information for details.

When it comes time to actually send in all that paperwork and the tax payment due, for members of the military, location is everything.

First, where to file. For soldiers with domestic permanent-duty stations (in the United States or Puerto Rico), taxes go to the processing center associated with those stations, not the soldiers' home states. If they're stationed overseas, they send forms and payment to the IRS processing center in Austin, Texas [source: Bell].

Next, deadlines – and these can vary considerably.

As with civilians, though, these extensions only apply to paperwork, not payment. The IRS still expects to receive any tax due by April 15 [source: Bell].

All of this goes out the window when soldiers are in a combat zone (or an area designated as combat-zone support) or hospitalized due to service in a combat zone. They receive an automatic deadline extension of at least six months, and this extension applies not only to paperwork but also to payment [source: Liberty Tax Service].

The IRS is typically aware of which taxpayers are stationed in combat zones; the organizations gets the necessary information from the military. If the IRS misses someone, though, military personnel can call the IRS, send an email to combatzone@irs.gov, or simply write "Combat Zone" and the deployment date at the top of their tax forms when they file [source: Bell].

If you're still not completely sure exactly when tax is due, what to exclude and when excluding income could end up costing you (join the rest of America), there are experts who can help both at home and abroad. Military personnel can get tax advice from their bases' finance offices, and often can have their returns prepared for free by the Armed Forces Tax Council or by IRS-trained volunteers [sources: IRS, Bell]. Some versions of tax preparation software are free to military personnel. Many U.S. embassies offer help during tax season, too, from January through June – though for soldiers who receive automatic six-month extensions due to combat, that may not be of much help [sources: Bell, TurboTax].

But then, if you're in a combat zone, don't worry about it. Taxes should be the last thing on your mind.

Clearly, this is not a comprehensive tax guide for military personnel. It's a review of some military-specific guidelines and quirks in the system affecting soldiers and their families. In deciding what exactly to address in this piece, I picked the issues that seemed most relevant, surprising and different from civilian taxpaying. For complete details on the tax code as it relates to military service, see Tax Information for Members of the Military from the IRS. It's remarkably easy reading, considering the source.