How a Fair Tax or Consumption-based Tax Would Work 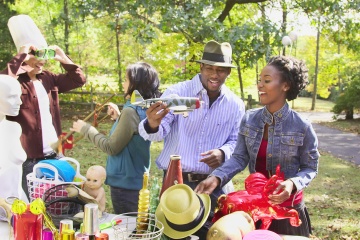 Under a consumption-based tax system, items are taxed just once. After that, used items can be bought and sold tax-free.
Steve Prezant/Spirit/Corbis

The Fair Tax or similar consumption-based tax would completely do away with federal income taxes, including personal, estate, gift, capital gains, Social Security and Medicare, self-employment, alternative minimum tax and corporate taxes. Instead, most purchased items would include a 23 percent tax that goes straight to the federal government. The tax would be collected only once, which means used items could be bought and sold tax-free.

The actual tax hit for individuals would be closer to 30 percent, because instead of paying an additional tax at the register, the tax would be built into the price of the item you're purchasing. For example, if you purchased an item that is normally $100, the new price, including the tax, would be $130 ($30 is 23 percent of $130).

Social Security and Medicare would still be funded, proponents say, but the revenue would come from sales tax instead of income tax. Individuals could still receive Social Security income, but under a Fair Tax, they would not pay taxes on the income received from Social Security.

Consumption-based taxes are said to be generally regressive, meaning that lower income individuals pay a greater share than those with higher incomes. The Fair Tax is designed to be more of a progressive consumption tax, with the inclusion of a prebate that would help lower-income individuals and families consume necessities tax-free. The prebate is basically an allowance equal to 23 percent of an individual or family's yearly consumption needs based on income [source: FairTax.org].

But the Fair Tax is not the only approach. Other consumption-based tax plans include a personal expenditure tax that would allow filers to compute their annual spending and then tax anything above that at gradually higher rates (so the biggest spenders pay the most).

There's also the so-called Bradford X tax, which is similar to the Fair Tax, but would also include a progressive tax on wages and business earnings. Under the Bradford X tax plan, wages would be taxed at graduated rates above a certain exemption amount for the lowest wage earners. Businesses would be taxed on cash flow at a flat rate, equal to the highest wage-tax rate. All of these plans include tax credits or payments to lower-income workers [source: Viard].