The Ancient Origins of the 'Death Tax' 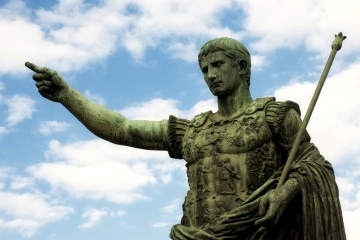 Thanks to Emperor Caesar Augustus, Romans had to grapple with their own death taxes.
only_fabrizio/iStock/Thinkstock

The death tax has endured so long partly because it's a convenient way to collect revenue. After someone dies, the community must calculate the person's wealth for distribution. This is usually a public transaction, as opposed to private gifts made during life, which are harder to tax [source: Smith]. Thus the government can easily swoop in and take a share.

We know the ancient Egyptians understood this because we have papyrus with depictions of a man being fined for failing to pay the succession tax for his inheritance from his father. Another papyrus depicts a father giving his possessions to his children during his life for a small tax in order to avoid a larger death tax [source: West].

The Romans used the death tax in the first century, when Emperor Caesar Augustus instituted the Vicesina Hereditatium. This translates to "twentieth penny of inheritances" and taxed "successions, legacies and donations" after death [source: Smith]. However, this Roman tax also allowed exemptions for close family and charity to the poor, similar to the modern tax. Pliny the Younger criticized the tax, saying it cruelly took advantage of grieving families [source: Eisenstein]. Yet the tax endured in some form or another for at least a few hundred years [source: West].

The death tax was also prominent in feudal England and France. The most significant medieval reference is found in the Magna Carta. In 1215 feudal England, rebellious barons forced King John to sign this document, which listed many limitations on his powers. In feudal society, the king owned the land and granted its use to his subjects during their lifetimes. Kings and lords would charge a death tax (called relevium, translating to relief) for the kindness of allowing succession.

In practice, the seemingly arbitrary fees fueled bitterness. One of the first clauses of the Magna Carta states that the king agrees to limit the relief heirs must pay upon the death of any "person that holds lands directly of the Crown" [source: British Library].

The Heriot (or Hereget) was also an early incarnation of the death tax in which a lord would get the best armor of his knights who died in battle. The famous Anglo-Saxon tale of "Beowulf" makes reference to this custom when the hero states, "If I fall in the battle, / Send to Higelac the armor that serveth / To shield my bosom, the best of equipments, / Richest of ring-mails" [source: "Beowulf"].