A Brief History: The Road to Medicare 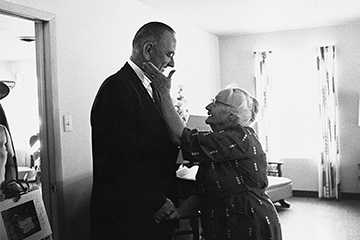 An elderly woman thanks President Lyndon B. Johnson for his signing of the Medicare health care bill in April 1965.
© CORBIS

American health care reform efforts reach back at least as far as Theodore Roosevelt's 1912 presidential campaign promises, which included national health insurance, women's suffrage, industrial worker safety and social reforms [source: The New York Times]. Roosevelt was defeated by Woodrow Wilson that year, but the ugly fact that millions of Americans could not afford adequate health care, and that the health of the nation was suffering as a consequence, would not be ignored. By 1930, small groups were pioneering health insurance, but more clearly needed to be done -- particularly as the Great Depression deepened [sources: Goodridge and Arnquist; The New York Times].

In 1931, a 48-member committee led by Interior Secretary Ray Lyman Wilbur recommended that communities spread medical costs by establishing medical centers funded by membership fees and supplemented with tax dollars. Advocates argued that such a system would be better for both consumers and providers. But opponents, most notably the American Medical Association (AMA), denounced the plan as socialist, arguing that "state medicine," handled wrongly, could drive the best and brightest from the medical field, increase bureaucracy and harm the existing relationships between private physicians and their clients [source: The New York Times].

Such counterarguments, and the strong opposing influence of the AMA, would echo throughout future reform attempt. This resistance partly explains why the same Congress that passed the New Deal, which instituted Social Security and unemployment insurance, refused to seriously entertain health insurance legislation [source: The New York Times]. It also played a role in later congressional pushback against Truman's long fight for health reform, which included an attempt at creating compulsory national health insurance. Funded by a 3 percent payroll tax, Truman's plan essentially would have nationalized the medical profession [source: Phillips].

Meanwhile, the idea of prepaid hospital insurance had increasingly caught on in the 1930s, and coverage continued to spread well into the1950s. Labor unions won court cases enabling them to make health coverage part of collective bargaining. In 1954, the Internal Revenue Act added it as a tax-exempt employee benefit [source: Goodridge and Arnquist].

John F. Kennedy took up the cause in 1962, but powerful medical lobbies again saw to it that Congress kiboshed his attempt. But obstruction had finally faltered by July 1965 when, fueled by a post-1964 Democratic dominance in Congress, strengthening labor unions and rising civil rights movements, President Lyndon Johnson signed Medicare and Medicaid into law, providing health care coverage to people 65 and older, as well as to low-income and disabled citizens. In 2014, around 53.8 million Americans are on Medicare and 63 million are on Medicaid [sources: Goodridge and Arnquist; CMS].