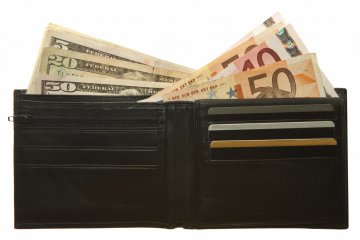 If you're an American who is making money in another country, there are some steps you can take to keep from being taxed twice.
iorpt/iStockphoto/ThinkStock

As it becomes easier and easier to travel from one place to another, signs of an increasingly globalized society are cropping up everywhere. Gone are the days when folks used to hop aboard an ocean liner for weeks at a time to get from one continent to another. Now, it's by fast and cheap(ish) air travel. With this freedom to move comes the similar freedom to live wherever you want, whether it's a cabin in Alaska, an apartment in Geneva or a beach in Tahiti.

For Americans who retain their citizenship while living abroad — and those who happen to work for an employer outside of the U.S. — these situations can raise complicated tax issues. Generally, all of the money that a U.S. citizen earns can be taxed by the federal government. The good news is that the feds allow many taxpayers to avoid being taxed twice on money earned outside of the country. The foreign tax credit applies to taxes paid to a foreign country on money earned from a "foreign source" and which would otherwise be subject to taxation in the U.S. [sources: IRS, IRS].

The Internal Revenue Service warns on its website that "foreign tax credit laws are complex." In the words of Jeff Bridges' character The Dude in "The Big Lebowski," "there are a lotta ins, a lotta outs, a lotta what-have-yous." Whether you're entitled to the credit — and how much of it you can claim — varies widely based on individual circumstances, including the type of income in question and the country in which it was earned. While the following information is a good start at understanding how the credit works, taxpayers who earn money outside of the United States are well advised to seek professional advice before filing their tax returns [sources: IRS, IRS].

Credit vs. Deduction vs. Exclusion

The foreign tax credit is one benefit available to taxpayers who earn money from outside the U.S., but it isn't the only one. Tax filers may also be entitled to a foreign tax deduction or to seek an exclusion for some of the money they make [source: IRS].

Before you can decide which option — or options — is best for you, it's important to understand the terminology. A tax credit reduces the money you owe at the end of the year on a dollar-for-dollar basis. So if you owe $5,000 and you get a $3,000 credit, the tax man will expect to get $2,000 from you. A deduction, on the other hand, reduces your total taxable income. A person who makes $50,000 in taxable income over the year and takes a $3,000 foreign tax deduction will be taxed as if he or she made $47,000 [source: IRS].

A person also can't claim a credit or deduction for foreign income he or she excludes when calculating tax obligations. The foreign earned income exclusion is available to citizens who either live in another country for the entire tax year, or reside in the U.S. but is a citizen or national of another country with which the U.S. has a tax treaty. These individuals can exclude up to $99,200 in income in 2014, meaning that this money isn't counted as part of their income for U.S. tax obligation purposes. A similar exclusion is also available for foreign housing costs [sources: IRS, IRS].

In order to be eligible for the foreign tax credit, a taxpayer must meet each of these four requirements:

Married couples who file a joint tax return can claim the credit on any eligible taxes paid by either spouse. The total amount of the eligible credit is also reduced by any sums that are eligible for a foreign earned income or foreign housing exclusion [source: IRS].

A particular foreign tax payment will qualify for the credit only if it isn't refundable and not used to subsidize someone else's tax liability. The tax must also be paid to a country that hasn't been designated by the Secretary of State as one that repeatedly provides support for acts of international terrorism, that the U.S. has diplomatic relations with and for whom the U.S. recognizes the country's government [source: IRS].

A tax deducted from wages is a good example of the type of payments intended to be covered by the credit. That includes money paid to U.S. possessions like Puerto Rico and American Samoa [source: IRS].

Taxpayers who earn money from certain countries with which the U.S. has a tax treaty in place may be eligible for additional tax credits. These credits are separate from, and in addition to, the money covered by the foreign tax credit. A full list of the countries currently covered by such treaties — which includes Australia, France, Germany, South Africa, Spain and the United Kingdom — is available in the IRS's website [source: IRS].

Once you determine that you're eligible for the foreign tax credit, the next question is: How much of a credit can you get? Typically, credit seekers are required to file a Form 116. This document is used to calculate both the amount of your credit and the maximum amount of the credit that you can take [source: IRS].

Certain tax filers are exempt from these limits. That includes people whose foreign tax obligation is no more than $300 ($600 for joint filers) and whose only foreign source of income is deemed "passive income." This form of income refers to money derived from dividends, interest rent, royalties, annuities and the like [sources: IRS, IRS].

Finally, a note about being straight with the tax authorities. If you're entitled to a foreign tax credit or exclusion, you may be thinking "Hey, why don't I just make things a little easier and 'forget' to mention some of that foreign income to the IRS. I'm not going to get taxed on it anyway." This, of course, is a bad idea. The consequences of failing to report income or assets can include additional taxes, money penalties and even jail time [source: IRS].