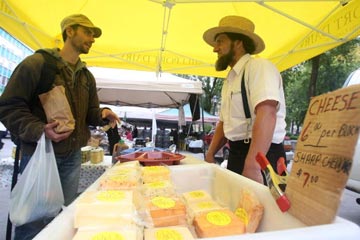 Amish farmer John Stoltzfoos (R) talks with a customer at the Union Square farmers market in New York. The Amish do not pay Social Security or Medicare taxes but they do pay income and other taxes.
Mario Tama/Getty Images)

Even if an individual is exempt from income taxes for whatever reason, most will still pay some form of tax. You have to pay sales tax on items you buy and property tax if you own a home. There are also user taxes such as those paid on gasoline, tobacco or alcohol.

Most people are required to pay Social Security and Medicare taxes if they work, but there are exceptions. While the Amish community pays state and federal income taxes and property and sales taxes, the group is exempt from paying Social Security or Medicare.

This is because the Amish community views the Social Security tax as a form of commercial insurance and is adamantly opposed to it. The group believes in self-sufficiency rather than relying on government aid programs. Amish families take care of their dependents and their elderly, accepting support from their community if needed. After clashes with the government, controversy over their rights and public support of the Amish position, the U.S. Congress exempted the Amish from participating in Social Security in 1965. They neither pay into the system nor use the benefits. They also do not accept welfare or unemployment benefits [source: IRS].

Railroad workers don't pay Social Security taxes either. However, the group is subject to a separate and distinct set of taxes outlined by the Railroad Retirement Act. These taxes are used to fund railroad workers' retirement and to pay their unemployment benefits. The Railroad Retirement Board, an agency working independently of the government, administers these benefits, working closely with the Social Security Administration [source: IRS].

Although the requirement to pay taxes isn't voluntary, some people are exempt. Age, ability and income level all factor into the reasons for some exemptions. If you don't fall into one of the exempt groups, take heart by remembering that taxes aren't all bad. Tax revenues keep the country running and benefit citizens through organized law enforcement, Social Security payments, community development programs, social services and national defense. So this April, smile when you file!