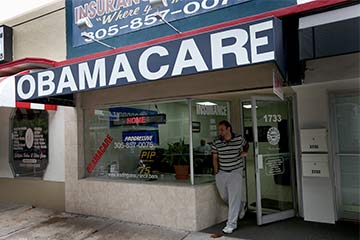 The Affordable Care Act (also known as "Obamacare"), a years-in-the-making overhaul of the American health insurance system, rolled out on Jan. 1, 2014, amid much fanfare and controversy. Opinions about the program tend to be extreme -- depending on whom you ask, the ACA is either a total fiasco or the best thing that's happened since sliced bread. But we're not here for that debate. This article will give you the facts on one crucial aspect of the act: the premium tax credit. This tax credit is the primary method by which the federal government is trying to make health plans offered in federal and state marketplaces more affordable.

To qualify for an ACA marketplace health plan, you must be a U.S. citizen or legal immigrant who does not have access to an "affordable and adequate" employer health plan. (We'll explain "affordable and adequate" later on.) To be eligible for the premium tax credit, your income has to fall within a certain range that would probably make it difficult for you to afford your own health insurance. You can choose to apply the credit in advance to your monthly premiums, or defer the credit until tax time. If you decide to receive the credit in advance, the IRS sends a portion of your premium directly to your insurer every month. If you defer the credit, you'll get it all as a lump sum to be applied to the taxes you owe (or the refund you're receiving). Not surprisingly, most people decide on the monthly payment option – otherwise, the premiums would probably be too much to handle [source: CBPP].

So, how do you know if you're eligible for the tax credit? What exactly is the income range, and how much would you be expected to pay every month? If your employer does offer insurance but it doesn't seem like a good deal, can you decide to get a marketplace plan instead? We'll walk you through the qualifying process on the next page.

Who Qualifies for the ACA Tax Credit? 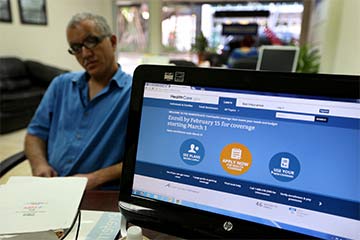 Hisham Uadadeh enrolls in a health insurance plan under the Affordable Care Act with the help of A. Michael Khoury at Leading Insurance Agency in Miami.
Joe Raedle/Getty Images

In most states, Medicaid covers you if you fall below the poverty line, so you wouldn't be eligible for coverage under the Affordable Care Act. Legal immigrants who live below the poverty line also qualify for Medicaid, but sometimes there's a five-year waiting period for coverage. Those who are on the wait list can apply for ACA marketplace insurance and the tax credit during that period.

Employer insurance is also a factor. If your employer offers health insurance that is deemed "affordable and adequate," you cannot apply for ACA marketplace coverage and the tax credit. "Affordable" means that the annual premium does not add up to more than 9.5 percent of your yearly income. To be considered adequate, the employer health plan must offer coverage equal to that of a bronze plan on the ACA marketplace. (We'll explain the plan categories on the next page.) If the insurance offered by your employer fits the bill on both counts, you must sign up for that coverage instead of an ACA marketplace plan.

You also have to file your taxes as an individual or jointly with your spouse. If you're a legal dependent or are married but file separately, you don't qualify for the tax credit. There are provisions for victims of domestic abuse who are still married but are not filing jointly.

So, once you've figured out that you qualify, how do you go about actually getting that credit and picking a plan?

How Is the ACA Tax Credit Calculated?

The amount of credit you receive is on a sliding scale based on your estimated income for the year, with those on the high end expected to contribute a higher percentage. A family of four making 400 percent of the poverty line in 2014 would have to pay 9.56 percent of their monthly income, or $760. A family living exactly on the poverty line would only be expected to pay 2 percent, or about $40 a month. For single people, your expected contribution after your credit would range from about $20 to $370, depending on income [source: Clark & Associates].

Once the percentage has been calculated, the program moves on to figure out the exact amount of your credit. The plans on the ACA exchanges fall into four categories, based on the percentage of costs they will pay [source: Healthcare.gov]:

The platinum plans offer the most coverage but have the highest premiums. The bronze plans are the least expensive but offer less coverage and more out-of-pocket costs. The amount you'll ultimately have to pay is based on the second-cheapest silver plan in your state that covers you or your entire family. This is called your benchmark plan. The cost of the benchmark plan minus your expected contribution is the amount of your credit.

While your credit amount is based on this benchmark plan, you do get to choose your own plan. You'll get the same amount of credit no matter what plan you pick. A platinum plan will have a higher premium than the benchmark plan, so the credit won't stretch quite as far. But if you go with a bronze plan, the premium might be equal to or lower than the amount of credit. It's possible that you could end up paying nothing.

However, you might find it makes more sense to use the credit toward a silver plan, which might mean you pay something out of pocket each month for premiums, but you come out ahead in terms of how much you pay for copayments and coinsurance. (In case you're wondering about making money by picking a really cheap plan, it's not going to happen: You can't get credit for more than the cost of a plan.)

If your income fluctuates over the course of the year, taking a partial credit could help if you don't want to owe money at the end of the year. Everything should come out in the wash at tax time – read on to find out how that works.

What Happens at Tax Time?

In a perfect world, everything will come out evenly when you file your taxes: You would have been exactly on the mark with the income estimate you gave at enrollment, and the credit due will equal the payments you received. But if the advance payments you received don't add up to the full credit you were due, you'll get a refund. If the reverse happens, you'll owe some money. And if your income doesn't end up being the same as the estimate you gave when you enrolled, the IRS will make the necessary adjustments.

But we all know things aren't always so easy when we're talking taxes. A lot can happen in the months between when you enroll and when the final assessment is made. New babies, new jobs, raises, pay cuts, interstate moves -- they'll all have an impact on your tax credit. This is why the government urges all enrollees to inform the marketplace of any life changes that happen over the course of the year. It's better to make small adjustments to your credit as you go than to get a possibly unwelcome surprise in April.

If it turns out that your income is higher than what you thought it would be -- or if there was another reason you received more credit than you were supposed to -- you will have to repay the IRS. But there is a cap on the amount you'll owe, based on your income not exceeding 400 percent of the poverty line. Individual taxpayers would pay $300 to $1,250, and a married couple would owe between $600 and $2,500 in 2014, based on where they fall on this scale [source: Kaiser Family Foundation]. But if they ended up making more than 400 percent of the poverty line, there is no cap and the full amount would have to be repaid.

And beware, potential tax evaders: If you don't file a tax return for the year you received the credit, you no longer qualify for further ACA tax credits.

For more information on the Affordable Care Act tax credit, take a look at the links on the next page.

As a freelancer who does not have adequate and affordable health care offered through my job(s), count me in as a fan of this tax credit!