by Jonathan Atteberry
Prev NEXT
5

Faking Your Death (and Other Dirty Tricks) 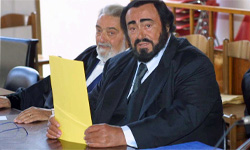 Lots of people have been tried for tax evasion, even opera singer Luciano Pavarotti in September 2001. The tenor pleaded not guilty and was acquitted.
AP Photo/Alessandro Fiocchi

On Jan. 11, 2009, financier Marcus Schrenker's private plane crashed in the Florida Panhandle. Schrenker, strangely enough, was nowhere to be found. After tracking down Schrenker over the next few days, investigators now believe he may have been faking his own death in an attempt to run from financial and legal problems.

Granted, faking your own death may not strictly fall under a list of "common" tax mistakes, but Schrenker wouldn't be the first person to give it a try. In 2007, British nightclub bouncer Mark Vaughan was convicted of two counts of tax evasion related to faking his death. Vaughan's scheme was a bit less dramatic than Marcus Schrenker's plan. Vaughan simply called the tax office and informed them that he'd died of a stroke, and he actually managed to go two years before he was finally caught. Faking your own death is hardly the only way to commit tax fraud. Hiding money offshore and abusing ­charity donations also fall into the category of fraud and can land you in serious trouble.

More recently, the IRS has reported an alarming increase in phishing, where scam artists send e-mails claiming to represent the IRS in an attempt to gain sensitive financial information from unwitting taxpayers. According to Green, however, the IRS never sends unsolicited e-mails or asks for detailed personal and financial information. He also encourages taxpayers to be cautious and aware, and to forward suspicious e-mails to phishing@irs.gov.