by Jonathan Atteberry
Prev NEXT
1

Not Filing at All 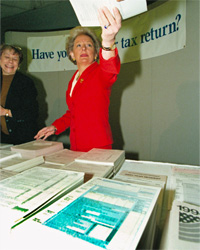 Even if you don't have the funds to pay your tax liability at the moment, the IRS encourages everyone to file something.

One option is to file an installment agreement request (Form 9465). This form allows you to outline a payment schedule for your taxes in the event you don't have the money to pay all at once. The IRS will accept your installment plan if you meet a certain set of requirements. For instance, you'll can't already be on an installment plan with the IRS. While you will still be charged interest and penalties once you've worked out a repayment schedule, those rates are much better than the rates for not filing at all.

Another option is to file for an application for automatic extension of time to file U.S. individual income tax return (Form 4868). Granted, the form's name is a mouthful, but the six-month extension for filing your returns that you'll receive in return will help you forgive the clunky title. While a 4868 doesn't grant you an extension on payments, the penalties for late payment are much less severe.

No matter what you do, don't let April 15 pass you by without filing your returns. Even if you're owed a refund, you'll cause yourself problems in the future by not filing (and you can lose your refund in the process).

Keep reading for more links on the tax man.