­The U.S. Social Security system has been in the news a lot lately. While politicians throw around dramatic words like "crisis" and "bankrupt," regular Americans have more mundane concerns. How will they pay their bills when they retire? What happens if they are disabled and unable to provide for their families?

Social Security is a system that attempts to address all these issues and more. From its roots in the Great Depression, Social Security has changed with the times to try and help poor, out-of-work, disabled and elderly Americans. Whether the system is truly in crisis or not, it will surely have to change in the coming decades as the number of retirees increases relative to the number of workers.

Social Security is a far-reaching system, offering many types of benefits. In this article, we'll focus on the retirement- and disability-benefit aspects of the Social Security system. We'll find out how Social Security got started, how it works today and what might happen in the future if we don't make some changes.

Most Americans are covered by some form of Social Security. Exceptions include some government employees and railroad workers, who are covered by other programs, and certain agricultural and domestic workers. But chances are, if you are a U.S. citizen and you work in the United States, you receive a statement in the mail every year that looks something like this:

If you receive this statement, it means that you are paying a certain percentage of your salary into the Social Security system -- and the idea is that you will get this money back once you retire so you have some extra money to live on once you stop receiving your paycheck.

In the next section, we'll look at the different types of Social Security benefits.

Where Does the Money Come From?

As of June 2005, 6.2 percent of a worker's wages are diverted into the Social Security trust funds (one for retirement benefits and one for disability). Employers put in an additional 6.2 percent, resulting in a total payroll tax of 12.4 percent. Self-employed workers pay all 12.4 percent themselves. Income greater than $90,000 is not subject to Social Security taxation -- this is known as the "maximum amount."

Social Security is not just about paying retired people a monthly income. The program acts as insurance for Americans who encounter difficult financial situations. This includes (but is not limited to):

This chart shows the distribution of the most common types of Social Security benefits:

So let's start by discussing how people receive retirement benefits and how the amount of the benefit is determined.

Money in the Social Security trust funds is invested in government bonds, which helps pay for public works projects around the country.

To receive most Social Security retirement benefits, a person must be "fully insured," which simply means that he or she has worked for a long enough time and has put enough money into the system. This is tracked using credits: You receive one credit for each quarter-year you work. So if you work for an entire year, you earn a total of four credits. To be eligible for retirement benefits, you need 40 credits. Since you can't earn more than four credits per year, you have to work for at least 10 years to ensure full eligibility. You have to earn a certain amount of money each quarter to get a credit for that quarter. This amount increases each year to adjust for inflation. In 2003, it was $890.

Once you reach full retirement age, you can receive your full retirement benefit amount. This amount is based on your earnings over your entire working lifetime. People who earned more will get more back. However, the system is skewed so that lower-income workers will receive a higher percentage of their former wages than higher-income workers.

Benefits are also subject to annual cost-of-living increases based on the CPI-W (Consumer Price Index for Urban Wage Earners and Clerical Workers). These adjustments are based on the price of goods purchased by approximately 32 percent of U.S. workers [ref] and average between 3 and 4 percent each year.

It is important to note that social security retirement benefits are not intended to be anyone's sole source of income (although this sometimes turns out to be the case -- see previous section). Social Security benefits will generally average out to about 42 percent of your former wages. Personal savings and other other retirement funds are expected to make up the rest.

Survivors insurance provides benefits to the family members of deceased, fully insured workers. A spouse at full retirement age will receive full benefits, while a surviving spouse between the ages of 62 and 65 will receive 70 to 99 percent benefits. A surviving spouse of any age who is caring for children will receive at least 75 percent benefits. Unmarried, divorced spouses over age 60 are eligible for benefits, as are unmarried children under age 18. Parents of the deceased worker can receive benefits if they were dependent on their son or daughter's income.

Social Security also provides benefits for people who become disabled in a way that prevents or limits their ability to work. Like retirement benefits, these payments depend on the number of credits you have put into the system. However, a full 40 credits is not needed. The exact number depends on your age.

Disability insurance covers both physical and mental health problems that last at least 12 months continuously and prevent "gainful activity." Drug and alcohol problems are not covered.

There is a five-month waiting period from the time the disability begins to the first benefit payment. Payments are generally the same as retirement benefits, even though the number of work years can be significantly less if someone is disabled while he or she is young. Family members can also receive benefits, and the rules are similar to retirement benefits. The exception is divorced spouses, who are not eligible for disability benefits if their former spouse becomes disabled.

S­ocial Security benefits do not happen automatically. When the time comes to draw benefits -- in the case of retirement, disability, etc. -- you must apply for them. You can get an application by visiting Social Security Online or your local Social Security office.

When you apply, you will need your Social Security card. Also, bring your birth certificate and your tax forms from the previous year. If you were in the military, bring your military discharge papers as well. If you have any family members who may be eligible to receive benefits through you, bring their birth certificates and Social Security cards, too.

If you plan to have your benefit payments deposited directly into a bank account, bring your account numbers and a blank check.

According to the Trustees' report, the amount of money in the Social Security fund will continue growing until 2018, at which point the amount being paid out for benefits will begin to exceed the amount being paid in by younger workers. There is enough money in the account to keep paying full benefits until 2042, at which point the account will start to run dry unless benefits are cut. The Congressional Budget Office report essentially says the same thing except that everything will take about 10 more years to fall apart.

While there may not be an immediate crisis, there is certainly a problem. As both President George W. Bush and former President Bill Clinton have said, it will be a lot easier to fix the problem now than it will be in 30 years, when the system is in imminent danger. The remaining question is, what can be done to fix the problem?

The raw numbers bring these potential changes into perspective: According to the Trustees' report, an increase of 1.89 percent in the Social Security payroll tax would keep the account full for the next 75 years. To achieve similar results, benefits would have to be cut 13 percent.

President Bush has made a different proposal, one that has resulted in a great deal of controversy. He wants to allow people to put some of their Social Security payments (up to 4 percent) into privately held accounts that would be invested in the stock market. Supporters of this plan say that stock market gains will offset future deficiencies in the Social Security system. They also note that this privatization would give Americans more control over their earnings, as they would own their own retirement accounts instead of simply turning the money over to the government.

Opponents of privatizing Social Security list several reasons why they think it would do more harm than good:

Bush has also offered another plan which he calls "progressive indexing." Under the current system, cost-of-living increases are tied to the CPI-W. Progressive indexing would keep that system for workers making $30,000 per year or less. High-income workers would get increases tied to the CPI-U (Consumer Price Index for All Urban Workers), which doesn't go up as fast as the wage index because it covers a larger percentage of the U.S. population [ref]. Workers earning an income in the middle of the two would get cost-of-living increases based on a formula that combines wage and price growth. The end result would be an overall cut in benefits, with higher-income workers bearing most of the cuts over time.

Another proposal involves raising the $90,000 cap on income taxable for Social Security. Variations involve creating a new surtax on income above $90,000, usually between 2 and 6 percent. This would put more money into the system without increasing the tax burden on lower-income workers.

A Brief History of Social Security 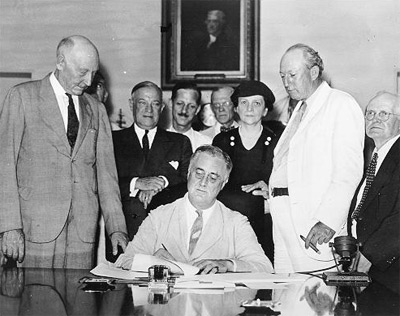 The term "social security" originally described any program intended to help people with limited financial resources. These people can include the poor, the physically disabled, the mentally ill and the elderly. European trade guilds had the first such programs, with government sponsored "poor laws" coming later.

The first widespread social security program in the United States was Civil War veteran pensions. Initially, payments were given to Union veterans who had been disabled in battle or to the widows of Union soldiers (Confederate veterans and their families were not given pensions). The program was then expanded to include any disabled Union veterans, whether they had been injured in the war or not. This was a huge program -- in 1894, more than a third of the money the federal government spent went to military pensions [ref].

The Great Depression of the 1930s brought into sharp focus the need for a comprehensive system to provide enough money to the poor and elderly so that they could live independently. Millions of Americans had no job or couldn't earn enough money to feed their families. In 1932, Franklin Roosevelt was sworn in as President with the Depression in full swing. He proposed an idea known as social insurance. This idea would eventually develop into the Social Security system of today.

In 1934, Roosevelt formed the Committee on Economic Security (CES). The committee, based on Roosevelt's social-insurance idea (which was already in use in almost three dozen countries in Europe), drew up a plan that would allow workers to place a small percentage of their pay into an aggregate account. Later, when they retired, they would draw money out of that account to help them meet their monthly expenses. The Social Security Act (SSA) became a law in 1935.

Over the decades, the U.S. government has adjusted the SSA retirement-assistance system to cope with changes in the population and the economic situation. Among other changes, families of workers were made eligible to receive payments; cost-of-living adjustments, or COLAs, were added so that Social Security benefits could increase along with inflation without requiring a major act of Congress; and disability provisions were added to the program.

For more information on Social Security and related topics, check out the links on the next page.