How are mortgage rates determined? 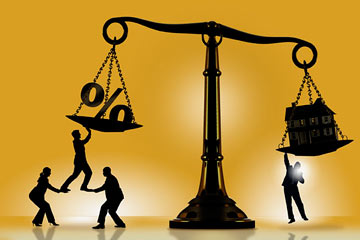 Ultimately, several factors, including the rate of inflation, the price of U.S. treasuries and the Federal Reserve, affect mortgage rates.
© 2009 Jupiterimages Corporation

What's life without a little risk? That may sound cliché, but in today's credit-dependent culture, it can be difficult or even unwise to go through life without taking some sort of gamble with your finances. To make a living, you'll need a job. To get the job you want, you may need formal education. To get to work, you may need a car. To try to be fiscally prudent in the long term, you may decide it's best to invest in a house. But, because they are so expensive, getting an education, car or house usually requires taking out a loan.

When you get a loan, you aren't the only one taking a risk. The lender is taking a risk on you. Interest rates are the cost of borrowing money and a kind of insurance for the lender. In general, the higher the risk, the higher the cost of borrowing money. But, if you get slapped with a high interest rate, you shouldn't necessarily take it personally. The lending institution isn't just taking a risk on you -- it is also taking a risk on the economy as a whole. You may be a very responsible manager in a juice-bottling factory. But if the economy sinks and the juice market suffers, you might be laid off. The lender has to consider such risk, despite your stellar credit rating. So, in simplistic terms, interest rates are determined based on how much of a risk the lender thinks it's taking on you and the economy.

Mortgage rates, however, are more complex than this. (A mortgage is simply a loan on a house, and a mortgage rate is the interest rate on such a loan.) And you can't point to one institution, such as the bank or the Federal Reserve, that determines your mortgage rate. When you follow the trail, you'll eventually find an intricate and interconnected web of factors that go into what determines mortgage rates.

On the following pages, we'll examine the secondary market of mortgages and then touch on some of the many factors that affect your mortgage rate.

Contrary to what many people assume, the bank or lending institution that grants you a home loan doesn't usually hold on to it. Instead, it enters what's called the secondary mortgage market:

So, if investors help determine mortgage rates by deciding how much they are willing to pay to invest in mortgage-backed securities, we could ask what goes into such decisions. And that's exactly what we'll explore next.

Links to the 2008 Recession

Ultimately, several factors, including the rate of inflation, the price of U.S. treasuries and the Federal Reserve, affect mortgage rates. That's because all these things and more affect how much investors are willing to pay to invest in the mortgage-backed securities (MBSs) we discussed on the previous page.

Let's start with inflation, which is the phenomenon where the prices of common goods and services rise across the board. Consistent and moderate inflation is actually a sign of a healthy economy, and should ideally result in a proportional rise in wages for workers as well. For lenders, inflation poses an inherent problem -- it means that the money people borrow now will be worth less when they come to pay it back. If economists predict a rise in inflation, investors will insist on higher mortgage rates to make up for this loss.

Because investors have many choices of where to invest their money, competition among other investments also determines mortgage rates. Like with bonds and other financial instruments, investors often compare MBSs against U.S. treasuries. You might assume a 30-year fixed mortgage would compare to a 30-year treasury. But in reality, borrowers in 30-year fixed mortgages are likely to refinance or move after only 10 years. So investors compare such mortgage investments to 10-year treasuries. (And because U.S. treasuries are safer investments, the return on MSBs must be even higher to attract investors.)

When the Federal Reserve, commonly known as the Fed, adjusts certain interest rates, especially the federal funds rate, this has an indirect effect on mortgage rates as well. The federal funds rate is the interest rate banks use when making overnight loans to other banks (to meet end-of-day requirements). To raise this and make borrowing more expensive effectively lowers the supply of available money, which can help stop a rise in inflation. The reverse is also true: lowering the federal funds rate increases the supply of available money and encourages inflation. (It should be noted that the Fed doesn't directly control the federal funds rate, but rather changes it by selling and purchasing securities. For more, see How Interest Rates Work.) As you can probably guess, such adjustments have such wide ripple effects that they affect mortgage rates as well.

We've just skimmed the surface of a complex system of factors that affect mortgage rates. For more on similar financial topics, explore the links on the next page.

How Credit Reports Work
How Capital Gains Tax Works
Kids & Cell Phones: How to Decide What They Need