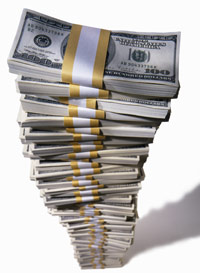 How do your liquid assets stack up?
Martin Mistretta/ Stone/Getty Images

Each of our bodies is 60 percent water; we all know we need to drink it to live. But how much of your finances should be liquid? If your boss called you into his office today and fired you, how long could you get along comfortably without a job? This is when the importance of having liquid assets will hit you like a ton of solid bricks. Many financial planners suggest that individuals keep easily accessible funds that will carry you through three to six months of comfortable living [source: McWhinney].

So it's probably a good idea to take stock of what you have right now in liquid assets. But what counts as a liquid asset really? Perhaps appropriately, the definition of a liquid asset is not fixed in stone, but can vary. Some people maintain that it must be able to sell at a fair market price within a week, and others say within a month. And some consider an item liquid even if it will suffer at least a little loss of value in a quick sale.

Stocks, bonds and bond funds are often considered as liquid, even though they may lose value when you sell them [source: Gentry]. Think of liquidity on a spectrum -- cash is inherently the most liquid on one side. Stocks and bonds are on the liquid side, but not as liquid as cash or bank accounts.

Assets that take more time to sell without losing value, like real estate, are more illiquid and fall on the other side of the spectrum.

If you have valuable personal items that you'd like to include in your grand total of liquid assets, understand that these are usually less liquid than the items included on the above list. However, if you have valuable enough items that you wouldn't mind selling, perhaps they're worth considering. These might include collectibles -- anything from valuable baseball cards to stamps or mint-conditioned original Star Wars action figures, jewelry, music CDs in good condition, movie or TV show DVDs in good condition and antiques.

You may even go as far as putting electronics or clothes in this list. Be realistic and think honestly of what your used stuff is worth. Remember that they aren't worth the same as when you first bought them. Unless you have a barely worn designer dress that's still in season, you probably can't depend on getting a significant payoff for used clothing.

Certainly, in this age of eBay and Craigslist, getting a good deal is becoming easier and faster. When you need money fast, no longer do you have to host a yard sale to trade a mint-conditioned original Beatles vinyl for five bucks, to an undeserving neighborhood youth. Now you can auction it off to a wider selection of bidders who appreciate its value.

You're not the only one concerned about a low level of liquid assets. On the next page, we'll learn how corporations must keep an eye on liquidity to live up to their obligations.