How Financial Aid for AmeriCorps Works 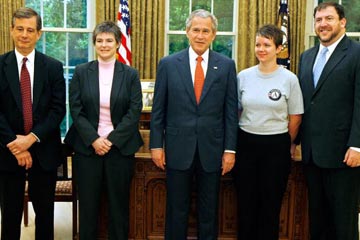 Former President Bush meets with members of AmeriCorps at the White House on May 18, 2007.
Chip Somodevilla/Getty Images

To support fresh interest and a bigger crop of applicants, the Serve America Act called for an increased number of AmeriCorps positions, boosting the ranks from 75,000 to 250,000 [source: Herszenhorn]. These positions are designed to meet specific goals and challenges according to the government's community service priorities.

There are a number of other acts, bills and laws related to the Serve America Act and the Segal Education Award. Senators Kennedy and Hatch also introduced the Incentive to Serve Tax Act in 2009, which uses tax breaks to encourage employers to allow employees to volunteer on company time. It's closely related to the Serve America Act, but it's a separate bill because it includes tax provisions [source: Independent Sector].

The Segal AmeriCorps Education Award Tax Relief Act of 2009 is intended to change the way the AmeriCorps education award is counted toward gross taxable income. This way, AmeriCorps volunteers would no longer have to pay additional income taxes in the tax year in which the award is used. The bill was referred to the House Committee on Ways and Means on March 18, 2009, but as of February 2010, it hasn't been decided if this bill will become law [source: GovTrack].

With more financial incentives to volunteer than ever before, and the growing needs and opportunities to help across our country, public service is expected to be a vital part of America's growth. If you've been inspired to pursue higher education or simply feel the call to serve, see the Lots More Information section for other helpful articles and links.