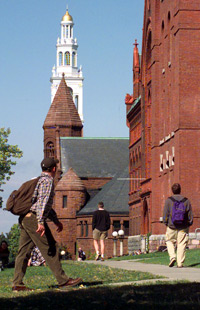 The University of Vermont, once named best for "tree-hugging...vegetarians"­
Image courtesy Toby Talbot/

Many schools have threatened to drop out of the U.S. News & World Report rankings by declining to provide the magazine the data it requests. But schools hesitate to do so because the rankings still carry a lot of influence. School officials don't want to do a disservice to prospective students by not providing them the information they need. However, some colleges and universities decided that they were ready to take that step. On May 5, 2007, 12 schools sent out letters to 1,000 liberal arts institutions asking them not to fill out the U.S. News peer-assessment survey. Many have agreed, led in part by the Annapolis Group, a coalition of liberal arts colleges. These schools will no longer provide U.S. News the information it requests or fill out the peer assessment. Justifying the decision, Neil B. Weissman, provost and dean of Dickinson College in Pennsylvania, called the U.S. News rankings misleading and "lame science" [source: Washington Post].

In addition, Sarah Lawrence College no longer asks prospective students for SAT scores, one of the pieces of data used in many college rankings. The decision also reflects a questioning by many educators, students and parents about the value of standardized testing.

The protest against ­rankings has spread to other disciplines and other countries. Business-school administrators worry that business-school rankings published by media like BusinessWeek, U.S. News & World Report and The Wall Street Journal typecast schools or fail to illuminate their worth.

In 2004, the business schools of the University of Pennsylvania and Harvard withdrew from the BusinessWeek rankings. In Canada, dissent is rising against Maclean's popular rankings. After meeting with Macle­an's to share concerns about the magazine's ranking methods, 25 of Canada's more than 90 universities stopped providing information to the magazine. Schools of all types joined the boycott, including the University of Toronto, one of the most well-regarded universities in the country. In order to make their data more accessible (and free), many of these schools then posted the data requested by Maclean's online.

Defenders of rankings say that they do serve an important purpose, whether introducing students to schools they may not know or giving them some idea of where a college stands. Even so, the critics of college rankings are determined in their mission.

On the next page, we'll look at what schools are doing -- besides ending cooperation with publications like U.S. News & World Report -- in order to enact change.