Is it safe to buy dented food from grocery stores?

Browse the article Is it safe to buy dented food from grocery stores? 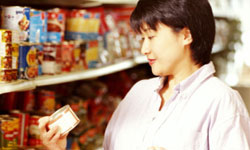 Food safety issues make headlines on a regular basis. As consumers, it's just as much our responsibility to rely on common sense when purchasing food as it is for packagers and distributors to ensure food safety at plants and factories. The general consensus is that it's safe to buy food from dented packaging. It does, however, depend on the condition the packaging is in and the food contained inside.

The most common form of foodborne illness from damaged food packaging is botulism. Botulism is considered a rare disease in the modern world since it's very preventable through safe food handling practices. Botulism, caused by the bacteria clostridium botulinum, occurs when a dent or damage to a can creates even a pinhole-size opening. The mixture of air and moisture from the food within the can spurs growth of the bacteria, and the food becomes contaminated. Low-acid foods such as green beans and mushrooms are the most susceptible to botulism growth. Foodborne botulism is actually very rare in the United States since potential cases of botulism are considered a public health emergency. Contamination from commercial canning usually results in voluntary recalls of food to protect the public.

Dented cans are the biggest culprit of botulism. Avoid buying cans with deep dents, especially ones that affect the top, bottom and side seams of the can. Bulging ends of the can means there is a leak in the can, and air has become trapped inside. A dirty label can also mean the can may have a leak, and excessive rust on the can that won't wipe off should not make its way into your grocery cart.

Here are some more tactics to keep in mind the next time you're strolling through the supermarket aisles:

On the next page, take a look at how some common non-canned foods are packaged and what to look for when making your selections.

Each aisle in the supermarket contains different foods packaged in different ways. Certain foods should always be avoided if its container is damaged or compromised. Here's a general look at food and its respective packaging:

One phenomenon that has become more widespread is the rise of "scratch-and-dent" or salvage grocery stores. These stores have popped up around the country as a way both to ease the pain of high food costs and for supermarkets to clear their shelves of food that didn't sell well or that looks less than perfect. Salvage grocery stores have become popular because they offer deep discounts on food, produce and toiletries.

If you buy damaged food from a traditional grocery store and you have your original receipt, you should be able to return or exchange it if you discover it's spoiled after getting it home from the store. If you buy from a salvage grocery store, however, returns aren't allowed, so choose your food wisely.

Remember, with any food, if you doubt its safety, throw it out. It's better to be safe than sorry.

You may consider yourself a savvy supermarket shopper, but at what cost? According to a 2006 survey, the average American household throws away 14 percent -- about 470 pounds -- of all the food it purchases every year! That translates to nearly $600 annually in wasted food [source: EPA].