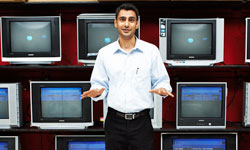 Tube TVs on sale? Wow, what a (not) great deal.
Zubin Shroff/Getty Images

Everyone loves a good deal. There's something immensely gratifying about finding that special item for an unbeatable price.

Despite the bright red tags and the assurance of a smiling sales associate, sometimes the deal just isn't as good as it's made out to be. Unscrupulous retail practices, scheming store managers and sketchy advertising mislead consumers into paying top dollar for supposedly discounted merchandise.

But you can relax your purse strings. We're going to reveal some of the most common great deals that are really just bad bargains. We'll explain how shipping charges may be spending your online savings and why membership discount programs almost always cost more than they're worth.

On the next page, we'll reveal the truth about one common promotional technique that's designed to trick consumers into buying multiple items at close to full price.

There's something about the phrase "get one free" that's hard to resist. Sometimes, these offers can be a great deal. Buy one, get one free promotions are fantastic -- you're essentially getting two products for 50 percent off. Buy two, get one offers are still good, but not as great, as now you're just dealing with just a 33 percent savings. Buy three, get one deals save you a reasonable 25 percent, and anything over that isn't worth bothering with.

Besides the rapidly diminishing savings, you'll be saddled with multiple versions of the same product. That's fine for something you know you'll use, like diapers (good luck finding a buy one, get one free deal on those), but how many jars of salsa do you really need? Buy 10 of those and earn a "free" jar that equates to 9 percent total savings, and you've stocked a cupboard full of salsa you're never going to use. Congratulations! 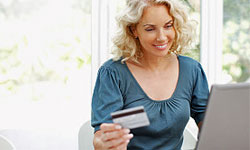 What's the point of saving a buck of two off retail prices when you're shelling out twice as much (or more) for shipping? It's easy to let low-priced bargains pile up in your electronic shopping cart and overlook the rapidly accumulating shipping charges.

Before you stock up online, find a site that offers free or discounted shipping rates. And, unless you simply can't live another day without that suede fuchsia handbag, you should never pay more for express shipping. Getting your online bargain buys a few days sooner isn't worth wasting all the money you just saved -- it'd be the same as paying standard retail. Where's the victory in that?

Black Friday shoppers, does this sound familiar? You wait outside a store for hours in freezing temperatures along with several dozen other shoppers, ready to charge inside and grab that incredible, unbeatable deal. The problem is, no matter how long you've been waiting in line, chances are you're not going to be the one (or two) that get the product.

These much-advertised promotions are often just a ploy to get you and the rest of the masses into the store. The crazy deals do exist, but there are a very limited number of discounted products available (some of which will likely be claimed by store employees long before the line outside forms). The store takes a loss on these few items to get all those frantic holiday shoppers inside. Running, pushing and even fighting are par for the course with these kinds of sales, and the store makes its profit on the losing shoppers who usually stick around to buy something so the night won't be a total loss.

Before you cut Thanksgiving dinner short to secure a spot in line for that unbeatable item, read the fine print. If you see language like "minimum 3," you might want to spend your night in bed and wait for a good, but realistic Cyber Monday deal that won't require fisticuffs to secure.

Although the day after Thanksgiving has been considered the start of the holiday shopping season since the first Macy's Day Parade in 1924, the day didn't get its own name until the 1960s. Black Friday is the day that retail stores typically see their yearly operating costs turn from red (loss) to black (gain). 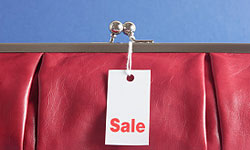 Just because there's a sign that says "sale" doesn't mean you've found a bargain. Some less-than-honest retailers have been known to drop the prices by only 1 or 2 percent (or nothing at all) for an excuse to put up promotional signs and stick enticing red tags on all their merchandise.

Find out what the normal list price of an item is, and compare it to competing retail chains and online stores before you buy. If the sale price is 10 percent off or less, find a better deal.

This is another classic Black Friday deception. Retailers will announce a CRAZY price on an item -- usually in the electronics department.

But after you fork over $499 on a 50-inch high-definition TV, you discover that this particular model's resolution is only 720, not 1080, and it doesn't produce the great color quality you love to see when you're watching your favorite movies. What's more, once you research the unpronounceable, off-brand manufacturer, you realized that you only saved $20 off the regular retail price of the set.

It's happened to all of us. You see an advertisement for the best price on the perfect item only to get to the store and discover it's sold out. You call every other nearby location with no luck, and just as you're about to give up, the helpful manager suggests taking a rain check.

Rain checks are written assurances that guarantee a customer the sale price on an out-of-stock or sold-out item. Rain checks sound great, but no matter what the manager says, there's no guarantee that item will ever be restocked. The best deals are often for products that are being moved out to make way for newer models or different inventory, so if you take a rain check on a cute red lamp at a closeout price, the promised discount won't be honored for the almost identical maroon one made by the same company that comes in next week. Plus, you might wait weeks or months for a rain-checked item (and in so doing, pass up great deals at other stores) and still not get your product.

The takeaway: Rain checks don't guarantee anything, so if you find another deal in the meantime, take it!

Rain checks were first given in the 1880s when baseball games were canceled because of rain. They entitled paying fans to free admission on the game's rescheduled date.

Many big-box retailers offer store loyalty cards that allow you to accumulate points toward store credit, product discounts and other incentives. However, if you do the math, you'll find out that most often, you're spending $500 or more before you see a $5 credit, and even then, it'll only be good for a limited time -- often a week or less. Forget that 1 percent discount, and shop around for a better deal. 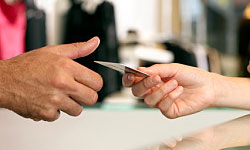 How much is that membership card saving you?
Bambu Productions/Getty Images

While sticking with a particular store because of a free loyalty card isn't a very thrifty decision, paying for an additional discount at the same location is akin to throwing away money.

You're almost certainly never going to make a dime off that investment, as the around-$20 price tag generally nets you an additional 10 percent discount. Therefore, if you pay for the discount program at a chain bookstore, you'll only save an additional $2 on a $20 book, meaning you're going to have to flip $200 in the next year on literature to make your $20 back. Sure, the store will offer incentives like special coupons and additional discounts on best-selling titles, but chances are you could find those books for the same or a lower price at a competing store or online retailer.

Of course, if you annually drop big Benjamins at that one chain, the membership may be worth your investment. Our advice? Consider applying for a library card. Libraries have a selection that rivals bookstores, and you can take those very same books home for free, which is the best discount ever.

Those huge, red going-out-of-business sales signs are so tempting. In theory, stopping by the doomed store makes sense, as a location going under really does need to get rid of its merchandise, right? Well, yes, but the trick is that most of the time, everything's already been sold.

Large liquidation companies buy all the company's assets and then mark up the prices before the going-out-of-business sale begins. Therefore, in the first few weeks of a store's final closeout sale, there's a good chance you'll be paying standard retail or higher prices, even after the liquidator's "discounts."

If you want to do some real bargain shopping, try to hit the collapsing company a week or two before the big sale starts. The inventory will still be owned by the original business, and they'll be trying to get rid of as much merchandise as possible before liquidation. It won't be the crazy discounts you'll see falsely advertised later, but you'll probably be able to find some excellent deals. Of course, you could always sort through the 80-percent-off scraps the day before the store permanently shutters its doors, but the pickings will be slim, and by that time, quality products will likely be few and far between.

At a going-out-of-business sale, anything goes. Liquidation companies will sell previously opened merchandise, inferior knock-off products not originally sold in the stores and, worst of all, because the company is now defunct, everything is sold as is, with a strict no-return policy.

Companies are in business to make money, and while there's nothing wrong with that, it doesn't mean you should just hand over extra cash for no reason. That's basically what you're doing whenever you buy an extended warranty. Stores wouldn't offer extended warranties if they weren't making a profit off them (which is why you can purchase a warranty on anything from microwave ovens to video games nowadays), so statistically speaking, it's much more likely that you're paying for nothing than saving yourself money down the road.

For example, when you buy a new item -- say that cheapo not-so-HD TV you were scammed into buying during the faux Black Friday sale -- you might've been tempted to pay several hundred dollars for an extended warranty. But what the eager sales associate didn't tell you is that besides the fact that you're spending more than what the TV will cost to replace it by the time it defaults, there's a good chance that the warranty won't even cover whatever goes wrong!

Extended warranties are extremely unreliable, and even if something's covered, there are usually limits to how much work the company will perform to fix the problem. Plus, many extended warranties' coverage overlaps the manufacturer's warranty, which means you're paying for something you already had. Just save your cash and take your chances -- it's less risky.

In 2008, more than 140,000 people complained or inquired to the Better Business Bureau about companies specializing in extended warranties.