The Negotiator's Dilemma: Cooperate or Compete? 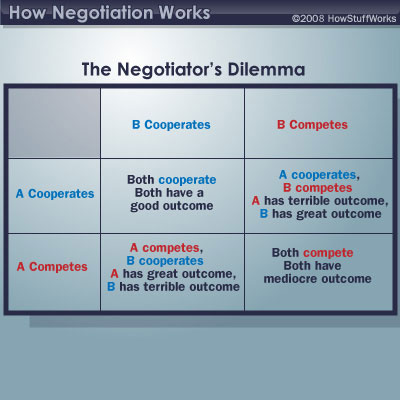 This table illustrates the options and possible outcomes of the Negotiator's Dilemma.
HowStuffWorks 2008

Critics of principled negotiation say it's too soft. Negotiation, after all, is usually about conflict and competition. Particularly in a zero-sum, distributive situation, someone must come out ahead. For these reasons, some people say that principled negotiation isn't the best strategy in certain situations. Authors Lax and Sebenius came up with one way to think about strategy in what they call the Negotiator's Dilemma, which is similar to the famous Prisoner's Dilemma.

If you know anything about Game Theory, you've heard of the Prisoner's Dilemma. In this scenario, two prisoners who are isolated from each other must decide whether to confess to their captors or keep quiet. If one prisoner confesses and the other doesn't, the confessor gets freedom and the other gets 20 years imprisonment. However, if both confess, each of them gets 10 years behind bars. Finally, if both decide to keep quiet, each gets only 5 years of hard time. Each prisoner must choose between two options, but can't make a good decision without knowing what his cohort will do [source: Heylighen].

Using this logic, your best strategy is to compete -- stay hard and claim value -- so that you end up with either a great or mediocre outcome [source: Tenbergen]. However, if both you and the other party realize that this is the best strategy for yourselves individually, you'll get a mediocre outcome. This way, both of you miss out on the better opportunity -- the good outcome -- which you'd get if both of you had cooperated by staying soft and creative value to enlarge the pie. No wonder they call it a dilemma.

Faced with this problem, theorists use computer models to try to come up with the best practical solution. The tit-for-tat strategy proves more steadily successful than others [source: Tenbergen]. This process involves starting out with a cooperative approach. As the negotiations go on, the strategy adapts by immediately responding to what the other side does. This means that it responds to competitive moves with a competitive move and responds to a cooperative move with a cooperative move. However, some people take issue with this strategy, saying it should be used only in the absence of misperceptions and fear [source: Tenbergen].

Let's make a deal: Take a look at the next page to find links to related subjects, including hostage negotiation.

From Negotiation to Dysfunction

Author C.S. Lewis describes how negotiation among family and friends gets turned on its head. Instead of vying for his or her own preference, each person wants to come out looking selfless. Suddenly, everyone is negotiating for the others' preferences. The person who makes the biggest sacrifice for the others becomes the winner, and this breeds bitterness amongst them all [source: Lewis].