Negotiation Theory: Don't Take a Slice of My Pie 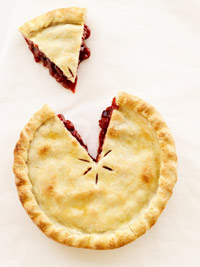 We use the idea of a pie to illustrate what people fight over in a negotiation.
©iStockphoto/Jill Chen

Given how many different situations in which negotiations pop up -- from the kitchen to the office to the war room -- you can imagine how many different kinds there are. But negotiation theorists give us several different concepts to help us sort out and understand the process. One of the most basic symbols for talking about negotiations in general is called the pie. In negotiations, whatever people fight for -- be it money, power, the bigger office or even the privilege of not having to take the trash out today -- is the pie. Usually, negotiations involve slicing up that pie, with each side fighting for the biggest slice they can get.

Using this pie symbol, think of negotiation as either distributive or integrative. Distributive negotiations are those in which there is a certain, fixed sized pie over which the sides fight. One party wins, and the other loses. For example, if countries are drawing political lines in peace negotiations after war, the territory one country gains is a loss to the other nations. Another name for this is a zero-sum game. Although this concept may seem obvious, it's not the only kind of negotiation.

Depending on what the pie is, you can also have an integrative negotiation in which the parties can actually enlarge the size of the pie. Theorists call this process creating and claiming value. This happens when parties think of new things that one side can offer the other and then claim parts for themselves. For instance, when negotiating salary increases, an employer could also offer extra vacation or better benefits in exchange for the employee settling for a lower salary.

Next, we'll take a closer look at the different approaches we can take when entering a negotiation.

This Belongs in a Museum

In negotiations, we use the symbol of a pie to stand for something people fight over. In film, famed suspense director Alfred Hitchcock popularized an analogous concept called "the McGuffin." The McGuffin represents anything that heroes and villains fight over to progress the plot, whether it be secrets, letters of transit or buried treasure.