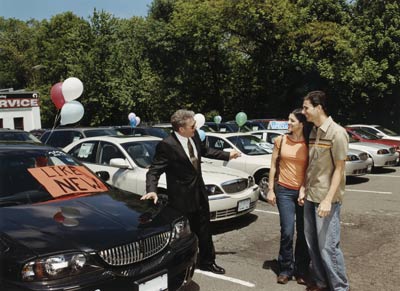 Most people associate negotiation with haggling the price of a used car.
Erik Rank/Photonica/Getty Images

In its basic form, negotiation is pretty simple and probably already familiar to you, even if you've never formally engaged in it. For instance, deciding on a price for a used car or a house are typical situations in which two parties negotiate. These classic examples represent a kind of negotiation commonly known as haggling. Here, when arguing over price, negotiation entails a simple give-and-take until the parties reach a compromise or fail to agree. Skilled negotiators will often include arguments for why a price should be more or less. Here's an example of a negotiation for a used car:

Buyer: A classic? This thing is an antique and a gas guzzler; I guess I could raise my offer to $3,000, but no more.

Of course, this tug-of-war could go on until the two parties agree on a price between $3,000 and $4,000, or they could simply never reach an agreement and give up. But this scenario demonstrates the basic formula for a negotiation:

The process of negotiation appears everywhere, from arranging who will run the errands to discussing which country can continue building nuclear weapons. It's a good idea to understand the different tools you'll need to be a successful negotiator. We'll equip you with those next.

To get something you want, especially a raise, the first thing you need to do is ask. As it turns out, women usually don't realize they should or don't like to ask. The book "Women Don't Ask" spell outs statistics showing that, compared to men, women rarely initiate negotiation. As a result, women miss out on thousands of dollars in wages. The authors say that women can and should stay tough on the issues without being aggressive toward other people. Women should also keep in mind that many things in life -- at home and at work -- are negotiable [source Babcock].