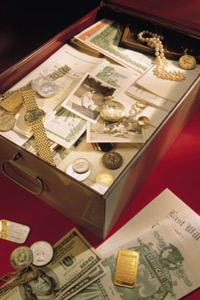 Not really into stashing your savings bonds in a safe deposit box like this one? Not to worry; the U.S. government is bringing savings-bond storage into the 21st century.
Comstock/Getty Images

Now that you know what a bond is, you might be slowly realizing that in fact, you actually have one of those (or more likely, that your great-aunt Linda once mentioned buying one for your bar mitzvah). There are a few possibilities for what could be happening with missing savings bonds. Let's start by talking about undeliverable bonds.

Undeliverable bonds are -- guess what! -- not able to be received by the owner. This means that after you (or great-aunt Linda) bought the bonds thirty years ago, they were somehow never received. You move thirteen times, Linda is happily retired in Florida and the government has no way of finding anyone to give money to.

There's also another type of missing savings bond, which is the mature (that is, no longer earning interest) bond that was simply forgotten. Keep in mind that savings bonds are long-term investments (unlike U.S. Treasury notes or bills, which can range from a few days to ten years). While it seems unlikely you'll forget that you put a hundred dollars in your piggy bank three weeks ago, in thirty or forty years, you might push aside the thought to concentrate on more practical matters at hand, like getting married or having kids. Or maybe you'll just be distracted by the awesome hovercrafts we'll all be zipping around on by then.

The American government is aware that many people no longer keep their savings bond certificates locked up in savings deposit boxes. In January 2012, the U.S. government will stop issuing paper bonds; instead, all bonds will be bought and stored electronically. Estimated to save $70 million dollars in taxpayer expense in five years alone, the switch to entirely electronic bonds is also a response by the American government to combat lost or undeliverable bonds [source: TreasuryDirect].

Although it might seem like the government gets greedy satisfaction from holding on to your money, bear in mind that it can't spend it. There are literally billions of dollars in savings bonds that have stopped earning interest, and the U.S. government would like nothing more than to have that money circulating back into the economy. So be a patriot and read on to find out how you can get back your missing savings bond loot.