How to Buy Cheap Airline Tickets for the Whole Family 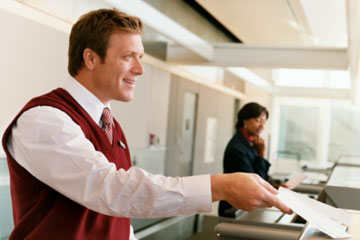 It's expensive to fly, but there are ways to save money and get good deals. See more family vacation pictures.
Digital Vision/Thinkstock

Unless you're lucky enough to have a family member who's a pilot or otherwise employed by an airline, chances are you're resigned to spending a mint anytime you have to fly with your family. Steadily rising fuel prices have put airlines in a tough corner in recent years, causing ticket prices to fluctuate wildly. Charges for checking baggage and other fees have some travelers wondering how long it'll be until the on-board bathrooms become coin-operated (don't get any ideas, major airlines)!

Fortunately for budget-weary travelers, there are a few handy tricks that savvy airfare connoisseurs employ to avoid paying top dollar for flights. A few of the most commonly known tidbits include booking fares between seven and 21 days prior to your trip, when they're often the cheapest. Also, flying on Wednesdays is a popular way to save because it's typically the least-traveled day of the week, so ticket prices are usually slightly lower. Saving cash can also be as simple as being flexible in your travel dates. For example, when possible, search for alternate itineraries that have you in the air on days other than Friday, Sunday or Monday, which tend to be the most expensive. In addition, if you're looking for a last-minute weekend getaway, be sure to check prices on the Tuesday prior, because that's when many airlines announce sales for later the same week or weekend. If holiday travel is a particular concern, try to fly on the day itself. Flights are substantially cheaper on Thanksgiving and Christmas, for example, than the weeks beforehand.

Of course, there are plenty of other ways to save, most of which only take some time and patience. Read on for more information about how to bring air travel more in line with your family's budgetary constraints.

You can always find deals on airfare if you know what to do. Try using one or more of these tricks the next time you need to book family fares:

Consider other airports. Sure, the airport with the cheapest fare might not be as close to your destination as you'd like, but it's less expensive, especially when you factor in the cost of tickets for your whole family. For example, the Ontario airport in California is further inland than the more conveniently located John Wayne Airport in Orange County, but it's significantly cheaper on average. Be sure to calculate the cost of gasoline and a rental car before you book, though.

Use airfare rewards. Sign up for a credit card that'll let you earn points toward future flights. Just make sure to read the fine print before signing up. Plenty of airline-specific cards have steep annual fees with very little return unless you travel frequently. Also, this isn't a good option if you need to find a deal in a hurry, as it takes a long time to accumulate enough points for a ticket.

Consult a reputable airfare prediction service. Web sites like Bing or Farecast will tell you if the current price on a particular flight or destination is rising, dropping or remaining steady. If you're looking for a deal, you should also check early and often. Sure, some airlines release sales on particular days of the week, but prices generally change multiple times per day. Pick a few search engines or airlines and check frequently to catch short-lived deals.

Of course, you can be notified about the best airline deals automatically by:

Some of these tips take a little more elbow grease, but think of them as the perfect way to justify souvenir costs and exotic meals!

Sometimes it pays to consult an honest-to-goodness travel agent. These experts have hidden methods to shave money off of travel expenses, offsetting the cost of their services.