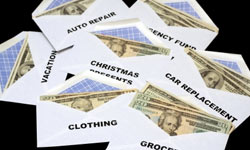 Paying cash for things and socking away the change is just one simple way to save.
©iStockphoto.com/RonBailey

Saving money should be a no-brainer. But a few years ago, most Americans just weren't doing it. They only held on to 1 percent of their income in 2005, which is well below the 12 percent personal savings rate they achieved in the 1980s. The financial crisis of 2008, however, was a shock that made many people aware of the need to build a cash cushion. The national personal savings rate bounced back to about 5 percent by 2011 [source: St. Louis Fed].

But since savings accounts normally pay less than 1 percent interest, some people think they need the advice of financial experts to grow their nest eggs. The fact is, though, that accumulating savings is not rocket science. And those low interest rates actually make regular saving even more important: In other words, you can't wait for compounded interest to grow your nest egg. Steadily socking away a portion of your income is still the best way to amass the money you need.

Saving is not so hard once you set your mind to it, and learning a few simple secrets can make the process even easier. On the next pages, we'll look at five relatively painless ways to put away a portion of your income for later.

Paying down debt is arguably the most valuable step you can take toward accumulating savings. As long as debt payments are draining a sum from every paycheck, you aren't going to have the funds for a significant saving program. And because the interest on your debt is always going to be higher than what you'll earn with a traditional savings account, reducing debt is the best way to put any extra money to work. Once you've cleared away your debt, you can put the funds you were formerly paying each month on a loan into your savings account.

But at the same time, that doesn't mean all of your extra income should go into debt reduction. Even if you owe money, you need a savings account. In addition to a rainy day fund for emergencies, you need to put away money for upcoming expenses like insurance premiums. Draw up a budget that lets you pay down debt as quickly as quickly as possible and accumulate some savings as well.

If you add money to your scheduled mortgage payment every month, you'll save a big chunk of money and pay off the loan considerably sooner. Say you have a $150,000 mortgage for 30 years at an interest rate of 5 percent. Your monthly payment will be about $800. But if you chip in an additional $100 per month, you'll save almost $35,000 in interest and pay off the loan six and a half years early. Can't afford that much? Even tossing in an extra $25 each month will save you $10,800 in interest and cut almost two years off the life of the loan. Not a bad deal [source: dollartimes.com].

Pay Cash, Save the Change

There's a lot of psychology that goes into saving. That's why one way to encourage yourself to save is to put away the plastic and pay in cash. Handing over currency when you buy something gives you a clear sense that you're spending "real" money. Credit or debit cards are so easy to use, they tend to make you forget you're spending your hard-earned dollars.

When you make that cash purchase, get in the habit of putting the change aside and depositing it into a savings fund. You'll be putting aside a small portion of everything you spend, and those dollars and coins will add up. Do the same thing with your checking account: Round up each amount to the next dollar when you enter it in your checking record. You'll accumulate extra funds in your account, which you can later move into your savings.

Paying cash can also help you to stick to a budget. Divide up your weekly spending and put the portions into a series of envelopes for various expenses. One envelope might be for dining out, another for entertainment, a third for gasoline. If you run out of cash before the week is over, you'll have to cut back. You might need to eat dinner at home, opt for a video instead of a movie, or take the bus while you wait for the next week to roll around.

For those who want to save and still have the convenience of paying with a card, Bank of America lets you enroll in a program called "Keep the Change" in which the bank rounds debit card purchases up to the next dollar. The difference between that amount and the actual price is automatically transferred from your checking account to your savings account [source: Bank of America]. Check with your bank to see if they offer something similar. For example, Wachovia has a Way2Save program in which a dollar is transferred from your checking to your saving account for each Check Card or electronic payment you make [source: Wachovia].

This one's really easy. You've just come into a nice chunk of money that you weren't expecting. It could be a gift, a tax refund or the proceeds of a garage sale. Maybe it's an inheritance, an insurance settlement or a bonus at work. Whatever the source and whatever the amount, it's a golden opportunity for adding to your savings. Set aside a portion of that money, and put it into your savings account.

A regular windfall is another opportunity to save. Usually this comes in the form of a raise at work, but it could be a lower rent bill (if you move into a less expensive place) or the end of a car payment -- anything that puts more money in your pocket every month. The idea behind socking it away is this: You got along without it before, so you don't need to spend it now. Save it and you won't miss it.

The bigger the amount of the windfall, the more you should think about putting it into long-term savings. You're not as likely to need a substantial chunk for emergencies, so you can use it to build your retirement account. Paying off debt should also be high on your list. But don't try to save every penny. Take a portion of your bonanza and splurge -- buy that new smartphone or take that dream vacation. It'll help you feel good about what you do save.

There are plenty of computer programs that can help you manage your savings. For example, free software available at Mint.com lets you consolidate all your accounts, including checking, savings, loans and credit cards. It creates graphs that make budgeting and saving easier to grasp. And you can access your information from your mobile devices [source Mint.com].

Back in the day, saving to buy something was a common way of managing money. Then, society went credit card happy and shifted to a "buy now, pay later" mindset. Credit cards gave people less reason to save and less money to put aside, because they're loaded with debt. But saving now to buy later -- the old-school style -- is an excellent way to avoid that cycle and get on the road to building a nest egg. Here's why:

Putting aside money for a big-ticket item works best if you set up a savings account for that specific purpose. You can budget regular payments into the account, calculate when you'll reach your goal and watch your funds grow. Setting up accounts for each of your savings goals in different banks makes even more sense. If your money's not as accessible, you won't be quite as tempted to raid your savings for some other purpose. As your savings accumulates, you can transfer it to other investments like certificates of deposit (CDs), which pay a bit more interest and further discourage you from cashing out.

Most regular banks and credit unions now offer some form of online banking. And there are also banks, like Virtual Bank, that operate exclusively on the Internet. Banking online makes it easier to set up multiple accounts, to transfer money into savings and to manage your financial affairs. If you're putting aside money regularly, online banking will simplify the process of handling your savings [source: Bankrate.com].

Regular saving, even of small amounts, makes the most sense. Don't put it off until you have "extra" money to put away. The easiest and most painless way to do this is to take decision out of the equation by making saving automatic. That way, you're less likely to be torn between saving and splurging. And you don't have to remember to save. It just happens.

The easiest way to automate savings is to have part of your paycheck deposited directly into your savings account. Working with your company's accounts payable department, you usually can direct your bank to put a portion of your pay into checking and the rest -- say, $50 or $100 per week -- into savings. That's it. Every week, you'll be saving money without even thinking about it. And you'll be surprised at how quickly your savings accumulates.

If your employer offers a 401(k) retirement plan, you'll have an even better opportunity for saving for the future. Once you sign up for a 401(k), all you do is decide how much money you want to contribute to your plan from your pay. That amount goes into an investment plan of your choice and is not taxed. Many employers make additional, matching contributions as well, so your retirement savings add up even faster. You can learn more about these plans in How 401k Plans Work.

However, don't overestimate how much you can afford to save on a regular basis. It's better to save a little less than to raid your savings account on a regular basis -- or to pay a penalty for drawing money out of your 401(k) plan early. For more tips on building up your savings, check out the links on the next page.

They were once considered way too conservative by investors looking for a high return on their savings, but government securities are a reliable, safe way to lock away money for the long term. You can buy them directly from the government at its Treasury Direct Web site. The bonds can be cashed in after a year; and they continue to pay interest until their maturity at 20 years. One type of bond, known as the I-bond, even has inflation protection built in -- which means the interest paid is partly pegged to the rate of inflation. Government bonds aren't a sexy way to save, but they're a secure and easy lock box for your nest egg [source: Treasury Direct].