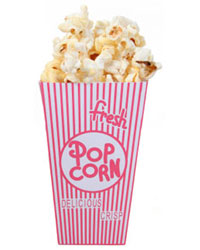 Enjoy your popcorn. It's been marked up as much as 500 percent.­
Graffizone/­iStockphoto

Nothing makes a retailer's eyes shine quite as much as a captive audience. When a consumer has no other option, he'll pay $4 for a bag of popcorn or $10 for a dinky cheeseburger. This is why concession food -- the snack food stuff you find at the movie theater, the state fair and along the boardwalk -- is so incredibly expensive. You're trapped and they know it.

Popcorn is brisk business. If you set up a popcorn cart in a well-trafficked neighborhood park, you can mark up your salty treat as much as 500 percent a bag [source: Entrepreneur.com]. At the movie theater, people grudgingly pay popcorn premiums of 1,300 percent [source: Donal].

FunFoodProducts.com lists some admirable profit margins for a few of its concession products:

All these hyper-markups are enough to make you want to sneak your own bag of popcorn into the movie theater, right? Just don't make it from one of those microwave bags. A three-bag box of microwave popcorn, which costs more than $2, contains about 10 cents of actual kernels [source: Paul].

If you think these snacks are overpriced, try checking into the next markup on our list: the hotel mini-bar.