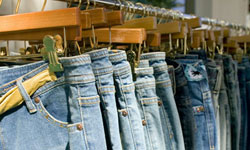 Jeans are often marked up more than 100 percent.
TerryJ/­iStockphoto

Jeans are prime targets for markups, whether they're cheap or expensive. For example, a $21.99 pair of jeans from Kohl's still has a 112 percent markup from wholesale, while a $300 pair of designer jeans from True Religion can boast a markup ­as steep as 300 percent over cost­ [source: National Labor Committee and Leder].

Eyeglasses carry astronomical retail markups. Some opticians charge 1,000 percent over wholesale for designer frames [source: Kadet]. Once again, the worst prices are at the mall or other chain stores where there are many other costs built into the price of the frames. If you already know your prescription, one option is to buy your glasses online. But then you'll never know how goofy you look in those square-framed turtle shells until they show up in the mail.

And now, for one of the biggest markup traps: concessions.