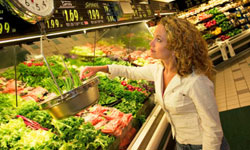 Shoppers will find that organic and prepackaged produce are marked up more than regular fruits and vegetables.
sjlocke/­iStockphoto

America­ns are obsessed with everything organic. But living the healthy lifestyle at the grocery store means big markups on organic fruits and vegetables. It's estimated that the average price of organic produce is 50 percent more than regular supermarket fruits and vegetables. The markup jumps to as much as 100 percent for items like organic milk and meats [source: Consumer Reports]. Organic foods generally have higher production costs, which get passed on to the consumer.

But the biggest retail markups in the produce aisle belong to those bags of pre-cut fruits and vegetables. When you buy a bag of pre-cut apple slices, you're paying about 75 cents more per apple for the luxury of not having to pick up a knife [source: Downing].

Consider these price comparisons gleaned from the Albertson's grocery store Web site at the time of this writing:

The next markup culprit is clothing and accessories.