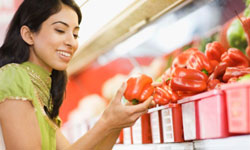 Save money on groceries by avoiding marked up products.
Jupiterimages/Brand X Pictures/Thinkstock

You always hear about those wacky coupon cutters who really know how to work a grocery store -- the ones who manage to fill up two carts and pay only $35. How do they do it?

The truth is you don't have to acquire coupon paper cuts to save cash at the supermarket. You just need to know which items to avoid. For your store to make a profit, it has to sell its products for more than cost -- obviously. However, certain items in your supermarket are marked up beyond reason.

Which products are rip-offs? Take a look at our list and learn some tips on how to save your money while you cruise the grocery aisles.

Many of us shop at wholesale stores like Costco or Sam's Club. You can save a lot of money by purchasing items in bulk, and supermarkets are paying attention. In fact, you may have noticed "bulk item" aisles popping up in your local grocery. Bulk automatically means cheap, right? Not so fast.

Before tossing that 24-pack of paper towels into your cart, do some simple math. (Don't panic. Just pull out your cell phone calculator.) To find out if you're really getting a deal, don't just look at the price tag. Look at the unit cost. Here's an example. Which is a better buy -- 2 liters of milk at $3.80 or 1.5 liters of milk at $2.70? 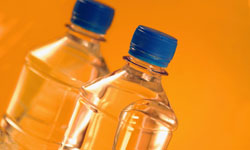 Even with all the moves to "go green," people still buy bottled water, for the convenience or because they think bottled water is safer than tap water. Even if you recycle your plastic water bottles (and you'd better!), we still advise against buying bottled water unless you're prepared to pay a 4,000 percent markup. Yep, you heard us correctly. Bottled water by the case can wind up costing you more per unit than gas for your car.

That's because it takes about five bottles of water to make the plastic for just one bottle of water. And many brands of bottled water are actually just pulled from municipal taps. So you're better off purchasing a water filter and drinking out of a glass.

Over-the-counter (OTC) medications -- like ibuprofen, decongestants and allergy meds -- come in both generic and brand-name packaging. But if you compare the ingredients of a generic bottle of aspirin with a brand-name bottle, you'll see they're almost exactly the same.

Generally, brand names are 30 to 40 percent more expensive than generics. How come? Brand names spend money on advertising, pretty packaging and marketing, and you certainly won't see TV commercials for generic medication. But that's usually the only difference. One note, though -- before purchasing a generic version, check the packages side-by-side to ensure the active ingredients are the same, as well as the dosages. 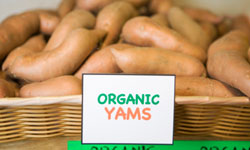 Organic produce is pricey for a reason.
Creatas/Jupiterimages/Thinkstock

An increasing number of people favor organic food and produce at the grocery store. Unfortunately, organic produce will cost you.

Generally, organic produce is marked up 30 to 50 percent compared to its non-organic counterparts. This is because organic farmers don't receive the same government subsidies that factory farmers receive. Also, growing organic produce tends to be more labor-intensive.

If buying organic is a priority for you, you can still avoid the markup. Buy your organic produce at the farmers market. It's cheaper, and you'll support local business. Also, if you worry about pesticides, consider produce that requires little pesticide no matter how it's grown. Fruits and vegetables like onions, pineapples, sweet corn, asparagus, bananas and kiwi are all grown with little insecticide.

The greeting card aisle at the grocery store is certainly convenient, especially for those of us who tend to wait until the last minute to pick up gifts. It only costs a couple of bucks to give your mom a mass-produced card inscribed with your deepest emotions and love, right? Unfortunately, if you compare that card to simply making or printing one at home, you're looking at a 200 percent markup.

A card means more when you make it yourself -- even if it's just a scribbled few lines on a folded up piece of paper. Those heartfelt creations are the ones people save, anyway. If you don't feel creative enough to make your own card, how about sending an e-card instead? Some e-cards are free, and they're also "green." 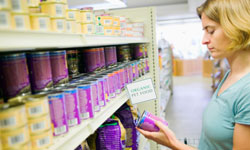 Just because pet food is sold at your grocery, doesn't mean you should buy it there.
Creatas/Jupiterimages/Thinkstock

Greeting cards aren't the only convenience items grocery stores mark up. Many nonfood products like office supplies and light bulbs cost more at the supermarket than they would elsewhere. That's because supermarkets know that you'd rather make all your purchases in one place than run around town to get everything you need.

Sometimes it's actually not worth making the extra trip to another store to pick up compact fluorescents or motor oil, if gas prices are high. The bottom line is that you have to decide what's worth more to you -- convenience or saving money. Or, get out your scissors and look for coupons for convenience items at the grocery.

Cereal is one of America's most popular breakfast items. It's convenient, kids love it and it's easy to prepare. But according to Entrepreneur magazine, cereal is marked up about 28 percent on average. And some brands are marked up even higher -- Kellogg's Corn Flakes, for example, has a 42.5 percent markup.

Like many products, the markup is a result of advertising and marketing costs. You'll notice, though, that many supermarkets sell generic versions of most brand-name cereals. The cost difference is major -- at one grocery store, a brand-name cereal was 43 cents per serving, while the generic was 20 cents per serving. Everything else about the cereal (ingredients, calories) was exactly the same, according to Good Morning America.

You'll have to look a little harder for the generic brands of cereal, because the big names use some of their marketing money to purchase the best spots on the shelves -- eye level for both adults and children, and featured on end caps. Look for generic on bottom shelves.

Non-organic Produce at an Organic Store 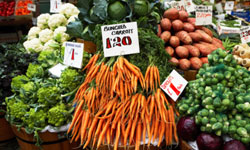 Is it really organic? If not, it should cost less.
Michael Blann/Photodisc/Thinkstock

Even if you're shopping at an organic or natural supermarket, you still need to pay attention to signage and prices. Just because an organic supermarket sells produce, this doesn't automatically mean all the produce offered is actually organic. And this non-organic produce could cost from 30 to 50 percent more than it would if you bought it at a regular supermarket.

The reason for this price differential is likely because of produce seasonality. If certain produce is out of season in the area, the store may pay extra to ship in non-organic produce to keep you shopping there. Just make sure you keep an eye on prices, and as a general rule, stick to seasonal fruits and vegetables that you know came from local sources.

This isn't the first time we've said this, and it won't be the last: If you're a big fan of convenience, you're going to have to pay for it. For some, paying more is worth the time or effort saved. For others, it just isn't.

Take sandwiches, for instance. Right next to your deli counter at the supermarket, you'll usually find a cache of premade sandwiches, hoagies and salads -- grab-and-go stuff. But since you're already in the grocery store anyway, why not spend a few extra minutes and buy your own bread, meat and cheese? You'll be able to eat a lot more sandwiches for your money, and you won't be paying into the sandwich counter's profit margin strategy. 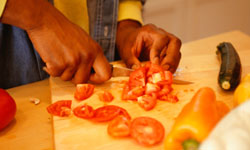 Chop up your own veggies rather than buying them precut.
Doug Menuez/Valueline/Thinkstock

It doesn't get more convenient than precut fruits and vegetables. In 2010, consumers spent more than $600 million on premade salads. Precut fruits and veggies are easy to toss into a child's lunch or put in your briefcase as a healthy snack. They save you time. But they don't save you money. You'll pay up to 40 percent more for the honor of having someone else slice up your produce!

You'll get more bang for your buck by breaking out the cutting board and chopping them yourself. It really doesn't take all that much time. Also, consider this: Once you cut up fruits and veggies, they start losing Vitamin C. So, you really should cut them right before you consume them.

For more on shopping and saving money, check out the links on the next page.