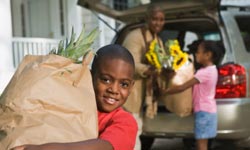 Image Gallery: Foods Under $5 In 2009, the average American spent about $3,500 on food consumed at home, according to the Department of Labor. See more pictures of foods under 5 dollars.
Comstock/Thinkstock

Grocery stores are making money on a few select items that (not coincidentally) probably get top billing on your shopping list.

Before we dig into the facts about America's top-selling food-related fare, though, let's get one thing straight: Today's grocery stores sell more than actual products; they're mass-merchandising that lovin' feeling. From empty corners turned into cozy cafes to comfortable lounges with free Wi-Fi, shoppers everywhere are encouraged to stay awhile -- all because successfully mined data reveals a warm welcome encourages you to spend more money.

If you insist on taking a load off during your next visit to the local super, make sure you read this article as you sup a latte. That way, you can balance the onslaught of subliminal spending tactics with savings strategies -- at least for the top-selling grocery items on our list. We'll share our shopping secrets, faster than you can order a no-whip frappe. 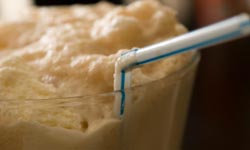 The biggest selling grocery item in 2009 was soda, like the one in this ice cream float.
Hemera/Thinkstock

Couple this information with the fact that Americans are consuming more sugar-sweetened beverages than ever before -- and contracting weight-related health problems at an alarming rate -- and you may want to opt for an alternative. You could save money by buying low-calorie pre-sweetened drink mixes and pepping them up with a touch of sparkling soda. Or, you could really save a buck and fill your glass with tap water.

Silly shoppers, cereal's not eye candy. Except it is. That's because the shelves housing colorful cereal boxes are often directly across from the candy section. While we search for our favorite cereal (which is usually moved to a new location that forces us to spend additional time scanning shelves), any accompanying kiddos can simply turn their backs and find a wall of candy ripe for the picking.

Even if we convince them to focus on their cereal selections, they'll opt for the brands at eye-level. So it's no accident the sugary, heavily advertised kids cereals are on lower shelves. Kind of explains why we're spending more than $6 billion annually on ready-to-eat cereal, doesn't it? If you're in a money-saving mood (and who isn't?), look for off-brands in bags, not boxes. Or buy a canister of oatmeal. It's not sexy, but it sure is good for you.

Grocery stores strategically locate their most delicious smells near points of entry: Chickens turning in rotisseries, cookies crisping in massive ovens, stir fry veggies steaming behind counters lined with eggrolls and wontons. And, because you've trained yourself to forego such deli creations for more economical DIY fare, you simply march past the goodness wafting in your general direction.

So, by the time you reach the center of the store and find your fortitude waffling in the frozen foods aisle, you're done for. Those frozen dinners, with their depictions of cheesy Panini sandwiches and crunchy fried chicken, nearly leap into your cart. Collectively, Americans bought $6.13 billion of frozen dinners in 2009. Whether we're taking these high-sodium, preservative-filled meals-in-a-box to the office or using them at home, it may be time to rethink the way we eat. Kind of makes investing in that cute Bento lunchbox with compartments for veggies and fruit seem like a real money-saver, doesn't it? 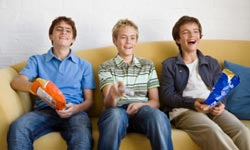 For many of us, snack food is a staple. We know it's not right, and if we ever get cast on NBC's "The Biggest Loser," we'll be the first to give it up. In the meantime, it's a safe bet our cupboards will never lack a bag of cheese puffs, pretzel sticks or highly seasoned cereal concoction. So it only makes sense we're going to grab some salty snacks as we zip through the grocery store ($8 billion of them, according to 2009 U.S. sales estimates).

Before you reach for the rows of snacks loitering on aisle end-caps, however, keep this in mind: They are probably not on sale (even if they appear to be). Your best strategy is to make a complete U-turn and head down the aisle. There, you'll find a bevy of snacks to tempt your sticky fingers -- and you might even find a few that really are a bargain. If you're into empty calories, that is.

Drive 100 miles (160 kilometers) and walk into a grocery store you've never even heard of, and I'll bet you can walk right to the milk. That's because it's almost always in a cooler at the back of the store.

Why position a staple at a most inconvenient location? This arrangement is a prime example of marketing science. You'll need to walk down aisles filled with lots of other tempting goods just to reach the milk. It's no wonder most of us enter the store to get one thing and leave with a $150 grocery receipt. And just think how this particular shopping strategy adds up over time. Americans in 2009 spent $11.2 billion on milk alone. Just think about all those other zeros we'd need to add, just to calculate the extras we picked up, too. 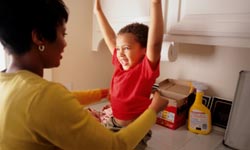 While not a food item, laundry detergent consumes a large part of the annual grocery bill.
Buccina Studios/Photodisc/Thinkstock

Americans spend $5 billion a year on laundry detergent. That's a lot of washing. Tired of spending so much on laundry detergent? You could save money by reading the label more carefully. Most liquid detergents come with a cap with interior measurements and the label will advise you what line to fill it to, depending on the load size. If you've been adding a full capful to every load, you've probably been tripling the amount you really need.

If you're intent on saving even more when it comes to clean clothes, be willing to switch to an off-brand or become diligent about your use of coupons. You could also switch to washing in cold water. According to the U.S. Department of Energy, 90 percent of the energy used during clothes' washing comes from heating the water. 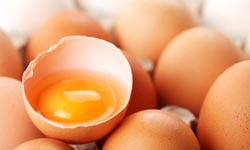 How many ways can you cook an egg?
iStockphoto/Thinkstock

Americans like eggs. So much so that we consume 76 billion of them each year. And, like dairy selections, eggs are usually positioned near the back of the store so we have cause to walk by all the other items we might just need. In this case, however, that's not necessarily a bad thing.

As you're picking up a dozen eggs, grab a few things to make a meal with eggs as the main ingredient. For example, you could whip up an egg sandwich using a poached egg, a baguette, a bit of ham and an ounce of two of cheese. Or try your hand at scrambled eggs with toast. Or eggs with a side of pancakes. Or hard-boiled eggs with a salad. You get the picture: There are plenty of options, and a dozen eggs could turn into several meals. After all, eggs are packed with protein and several other essential nutrients, and cost less than $2 for a dozen. 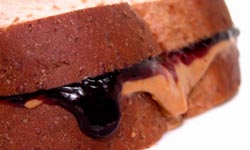 And, although peanut butter's inventor is unknown, by 1895 the Kellogg Co. (yep, the same folks who pioneered Corn Flakes) patented a process for making raw peanuts into a butter-like consistency. No one knows who first thought to combine PB with J, but it's believed it started during World War II when American GIs mixed the two rations to make the peanut butter more palatable. After the war ended and servicemen returned home, sales of the two foods soared.

Deli meats -- precooked or cured meats like roast beef, salami or bologna -- are easy fillings for sandwiches and offer a quick meal option. After all, what's easier than stepping up to the deli counter?

Well, if you're buying sliced meat, it's seeing the rainbow. Wacky as it sounds, lunch meat (which is the compressed end product of several cuts of meat and filler) or sliced cooked beef (which probably still has filler) will show all the colors of the rainbow if sunlight bounces off the meat at just the right angle. That's because the pigments in meat compounds, such as iron or fat, can give off colors -- even green -- you may not expect to see in meat that's not past its expiration date. 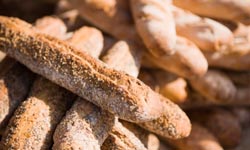 Nothing beats a fresh loaf of bread.
JupiterImages/BananaStock/Getty Images

If you've ever spent a pleasant hour in a neighborhood bakery-café, it's a relatively simple matter to understand why this restaurant segment is experiencing sales growth upwards of $4.3 million annually. After all, even with all we spend on restaurant starches, we still buy about $10 billion worth of fresh bread and rolls at grocery stores each year.

Whether filling our carts with fresh bread is a financially savvy move to avoid pricey bagel breakfasts or panini lunches -- or is simply meant to satisfy an in-home need for a menu staple -- bread is at the top of our shopping lists. And, because cheese and wine is probably penciled in, too, we've got the makings for a fine way to woo our tastebuds. Until our next trip to the market, that is.