No Money, No Bank, No Problem 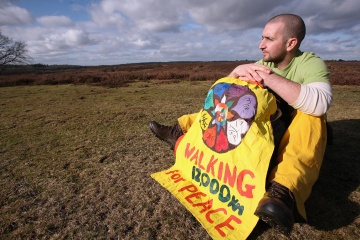 Mark Boyle walked thousands of miles without any money to promote the ideals of the “Freeconomy” movement.
Matt Cardy/Getty Images

Aside from alternative currencies, there's another intriguing mode of exchange known as "timebanking." Timebanking is a way of giving and receiving services by quantifying those services in terms of time. The core principle of timebanking is that all hours of work are equal. According to this principle, an hour of work that is often underpaid or, for that matter, unpaid (such as childcare) is recognized and rewarded with the same value as, say, carpentry.

Timebanking requires a network of people who all agree to its basic principles. They keep track of their credits via paper notes or online software. Proponents of timebanking say the system promotes a stronger sense of community by fostering networks of participants who agree to recognize one another's time as equally valuable, no matter what kind of service they're providing.

Timebanking, like M-PESA, is still a form of money. A truly radical way to live without a bank account is to forswear money altogether.

That's what author Mark Boyle did. For three years he adopted a moneyless lifestyle, and although he eventually returned to the world of financial exchange, he reports that the experience changed him profoundly.

According to Boyle, living without money forced him to rely on his own character and behavior as his primary asset, which he believes made him a better person. The experience also brought him into a more direct and intimate relationship with the natural world, which he was obliged to rely on completely for sustenance and habitat [source: Boyle].

Boyle supported himself through farming, foraging and barter. He maintains that he had more fun, not less, living without money. Instead of buying booze at his local pub, he made hard cider from wild apples, organized parties for neighbors and attended free cultural events, which in turn helped him get to know his community better.

In his books, and in newspaper articles, Boyle continues to advocate reducing dependence on the monetary system. He gives endless tips on how to live without soap (or make your own from foraged ingredients); how to farm, forage and barter for the food you need; and how to build your own home, all without spending a penny. He's even founded a "Freeconomy Community," which advocates, among other things, for the right to pay taxes in the form of labor.

So while living without a bank account might be a condition brought on by necessity (as in, your bank account was closed because of too many overdrafts) it's entirely possible that being cut off from the normative world of monetary exchange could end up being a liberating experience.

Author's Note: How Living Without a Bank Account Works

Many years ago I moved to a new city and found work before I found a bank to put my paycheck in. For several weeks I relied on check cashing outlets that charged me 3 percent of my check amount for the transaction. That was a lot more than what was charged by the credit union where I eventually opened an account, but I was grateful that such an outfit existed, otherwise I would have been wandering around town with a useless piece of paper in my wallet.