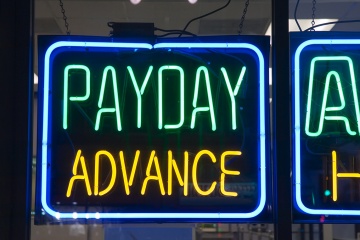 Payday loans are one alternative to traditional banking that frequently have unhappy endings.
EHStock/E+/Getty Images

Those who don't have bank accounts because they can't afford them rely on alternative sources for loans. The most notorious alternative is something known as a payday lender. A payday lender is an entity that provides small, short-term loans that typically take the form of an advance on your paycheck.

This sounds good until you click on "Rates and Terms," where you'll find that if you want to borrow, say, $300, you'll need to pay a fee of $25. That's a hefty bite — in fact, as the website notes, if paid back within eight days, it works out to an annual percentage rate (APR) of 380.21 percent.

As many as 12 million Americans use payday loans to get by, and most of them have annual incomes of $30,000 or less. If they had access to loans from banks or credit unions, the rates could be six times less than what payday lenders charge. Regulators are making noises about ensuring the underbanked have fair access to affordable credit. That's because it's becoming overwhelmingly clear how unfair it is that a person could be forced by circumstance to apply for a $500 loan that ends up costing him $1,300 in fees [source: Bourke].

Say you can get by without a bank account and manage to never need loans. You could, of course, rely on that old standby, cash. But keeping the necessary amount of cash on you (or in your house for that matter) isn't exactly safe. It also means you can't receive electronic paychecks and, more importantly, can't bid on that porcelain terrier you've been coveting on eBay.

For these reasons and more, some unbanked or underbanked people use pre-paid debit cards, which are just what they sound like — cards that can be loaded and reloaded with small, medium and large sums of money (typically at an ATM) and then used for electronic payments (at the gas pump, at the grocery store, online, etc.).

Again, in principle, they sound like a good idea, especially if you don't have a bank account. Many people who are underbanked — by choice or by force of circumstances — use pre-paid debit cards as a way to carry on living in the material world. Some claim that it's also a useful way to avoid exorbitant account fees for things like overdraft.

However, pre-paid debit cards often have a suite of hidden fees that ding users for everything from using an ATM to loading a card to checking your balance and even for overdraft [source: White]. Here again, regulators are stepping in to try and correct some of the unfair practices deployed by pre-paid debit card companies.

The alternatives listed here are two of the most prominent ways in which the underbanked deal with money, but there are still other ways of living without a bank account.