What Is the FDIC? 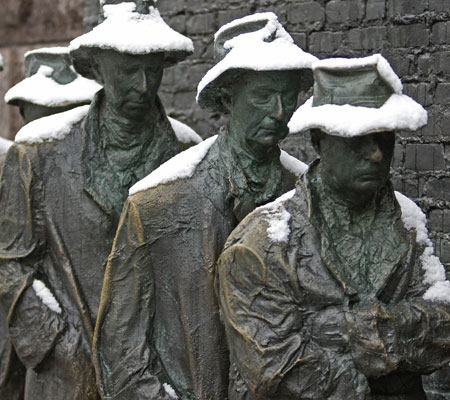 The sorrowful faces of the life-size statues are a powerful expression of the times, showing the inactivity and troubles of everyday citizens during the Great Depression.
AFP/Paul J. Richards

When the Great Depression hit the United States in the late 1920s, banks collapsed like houses of cards. Between 1930 and 1933, some 9,000 U.S. banks failed and took $6.8 billion worth of consumer deposits with them [source: Wheelock]. Some of the banks eventually reopened and recovered their customers' deposits, but the public as a whole had lost faith in the banking system.

To shore up confidence in the banks, President Franklin D. Roosevelt signed the Banking Act of 1933, which, among other things, created the Federal Deposit Insurance Corporation. The primary purpose of the FDIC was to ensure that consumers who banked with an insured bank didn't lose their money if the bank curled up and died. The original coverage limit for each depositor was $2,500, which increased to $5,000 in 1934 [source: FDIC].

Other major events in the FDIC's history include: