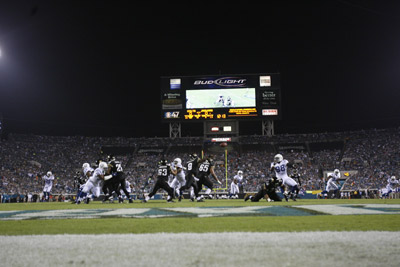 Municipal bonds help finance the construction of stadiums like this one in Jacksonville, Fla.
Thomas E. Witte/Getty Images

An economic shift like a natural disaster or the S&L crisis of the 1980s is more than enough to steer many investors away form the stock market and toward lower-risk securities like bonds and CDs (certificates of deposit). Most investors are familiar with Treasury bills -- bonds sold by the U.S. federal government. Municipal bonds are another option.

Municipal bonds are issued by state and local governments -- also called municipalities -- to raise money for public works projects like the construction and maintenance of bridges, hospitals, schools and water treatment facilities. A bond issuer (the municipality) sells the bond to the bond holder (the investor). The bond holder lends the issuer a fixed amount of money for a certain amount of time in exchange for regularly scheduled interest payments.

Municipal bonds are one of the safest long-term investments. Because they're so secure, they usually carry interest rates that average a percentage point or two below the going rate for Treasury bills. But in early 2008, something happened that's only occurred in the U.S. twice since 1990 -- the interest rate for municipal bonds crept higher than for Treasury bills [source: Waggoner].

­This is big news for one reason: Municipal bonds are exempt from federal, state and local income taxes if you live in the issuing municipality. Since 1913, the Internal Revenue Service (IRS) has allowed investors to withhold paying income tax on any earnings from municipal bonds. So when the interest rates for municipal bonds is higher than for Treasury bills, you'll earn significantly more especially since you won't pay taxes on those earnings.

Now it's time to learn more about these tax-free securities. What are the different types of municipal bonds? Why are they more attractive than other bonds or long-term investments? Where can you buy them? Keep reading to find out.