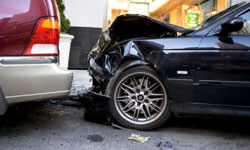 Getting into a car accident is bad enough, what with the wrecked car, the possible injuries the auto insurance claim. What's worse is that in rare cases that accident was a planned, coordinated effort, and innocent drivers become the pawns in an auto insurance scam.

Fraud, including insurance scams, is the second-most burdensome financial crime in the United States, behind only tax evasion. And it's far more common than you think -- experts say that more than 20 percent of bodily injury claims and 10 percent of auto damage claims as the result of car accidents are bogus [source: Edmunds].

Car insurance scams victimize law-abiding drivers by creating blemished driving records, legal headaches and higher premiums. Insurance companies also end up paying out millions of dollars each year to settle claims that aren't real, but easy to float due to the after-the-fact reporting nature of car accidents. Large criminal rings and individual criminals alike see car insurance companies as too tantalizing a cash source to pass up. And that winds up as an extra $200 to $300 per year on everyone's insurance policies [source: Edmunds].

Here are five of the most common auto insurance scams -- and some practical advice on how you can do your best to avoid them.

The most common (and dangerous) insurance claim is the staged rear-ending, also called a "crash for cash" or "swoop and squat." How it works: The scammer will slow down or come to a stop in busy traffic, or at an intersection or an on-ramp, or swoop in front of the victim, causing the driver to crash into them from behind. In almost every jurisdiction, rear-endings are considered the fault of the rear driver -- in this case, the victim of the scam. Adding to the potential insurance company payday: The con man may also claim to have neck or back pain, despite the accident's very low speed. This allows for both a collision and injury claim.

How to avoid this one: Never follow other cars too closely, allowing plenty of room to stop quickly. It's also a good idea to be aware of traffic ahead of the immediate car, so you can anticipate the need to slow down. 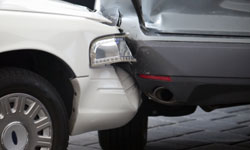 Only give information to the necessary parties.
Driendl Group/Photodisc/Getty Images

Let's say you've been in a car accident, and you're standing by the side of the road, waiting for a tow truck and police to arrive. It's too late to avoid the accident, but the scam in this scenario comes later. A con artist may approach you -- or even phone you, thanks to a tip from a crooked tow truck driver or mechanic -- and pose as a third-party insurance official or consultant in order to convince you to use the services of a particular health clinic for your injuries, or to use a particular body shop or lawyer. You have likely never heard of this mechanic or lawyer, and with good reason -- they're fraudulent. It's all part of a setup to get your information so as to file false or phony insurance claims, of which they'll take a hefty cut -- if not all.

This can happen in any kind of accident, not just rear-endings. Say you get in a fender-bender, and the other driver immediately reports back pain, "whiplash" or other injuries. If the driver seeks hospitalization, he'll file an insurance claim with your insurance company to cover the expense, even if it's bogus. Whiplash and phantom pain are especially hard to display on an X-ray, so scammers might cooperate with and pay off shady doctors, chiropractors and physical therapists to corroborate their injury reports, so as to get a payout from insurance companies.

One way to tell this scam may be underway: if after an accident the other driver acts and appears fine until the police show up, and then starts moaning and wincing. How to avoid getting bilked: File a police report, even for a minor accident. If the official record notes just a scratch or minor damage, it'll be far less likely an insurance company will believe the other driver suffered significant injuries. 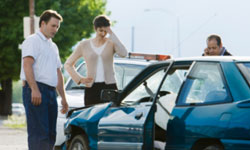 Take down as much information as you can about the accident itself.
Rubberball Productions/The Agency Collection/Getty Images

You know it's a bad car accident when people who weren't even in the car file a personal injury claim with your insurance company. Actually, this is a scam known as "the phantom victim." Whether an after-effect of a staged accident or a cash ploy that comes later, the scammer will attempt to file claims for additional passengers in the car, claiming pain or injury, even if no one else was present. (It's especially easy for scammers to try this with online claim filings.)

Unless you follow around the other driver for weeks, you can't really prevent this scam, but it can be thwarted. When gathering information after an accident, such as the other driver's license number and contact information, also count the number of passengers in the other car (if any) and take photos of the other car, its passengers and the general scene. Report any fishy circumstances to the state insurance fraud bureau.

There are more ways other than just a rear-ending for a scam artist to lure you and your insurance policy into danger. In a situation called "the drive down," what appears to be a friendly stranger who has the "right of way" waves you into traffic and then rams into the side of your car, merging into traffic just as you do. He'll then deny having given you permission, leaving you liable. A similar scam can occur with two cars vying for a parking space, which ends up with the same result -- a collision and an insurance claim. One more type of staged accident is the sideswipe, in which the eagle-eyed criminal will intentionally ram your car if you drift into the outer lane when turning via the inner lane of a two-lane turn zone at an intersection.

The best way to avoid these particular brands of trouble is to be alert and vigilant, always staying inside your lane and following "right of way" procedures.