Browse the article How the NASDAQ Times Square Display Works 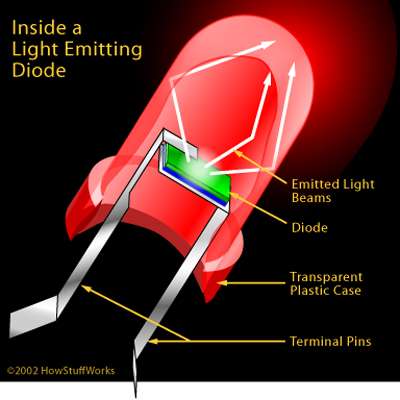 Times Square in New York City has an amazing light show, and NASDAQ's sign adds to it from the southwestern corner of the square. The NASDAQ display is notable because it's the largest continuous sign in Times Square. It has close to 9,000 square feet of display space -- about a quarter of an acre.

Have you ever wondered what it takes to make a sign like this? It looks relatively sleek and simple, but there's actually a massive amount of technology involved.

Let's start with the smallest part of the sign -- a single Light Emitting Diode, or LED. An LED is a tiny colored light bulb, and you can read How LEDs Work to learn exactly what makes them work.

On any large LED sign like this, it's normal to use clusters of LEDs to make one pixel. For example, a sign might use two red LEDS, two blue LEDs and three green LEDs to make a single pixel. By changing the amount of power going to the LEDs of each color, it's possible to mix the three primary colors together to create any color of the rainbow. Turn all the LEDs on and you get white light; turn them all off and you get black. And you can create any combination in between. In this sense, there are single LEDs that come in red, green and blue, while there are pixels made up of collections of red, green and blue.

The next step up in the NASDAQ sign is a tile. Each tile is about one square foot and contains 16x16 pixels. That's 2,048 LEDs in the case of the NASDAQ sign. The front side of the tile is black, and covered with LEDS. The back side of the tile looks a little like a computer motherboard. It contains all the electronics needed to drive all the LEDs on the tile.

The back of a tile looks a little like a computer motherboard. The tile contains chips and transistors that decode data and power the LEDs.
©2007 HowStuffWorks 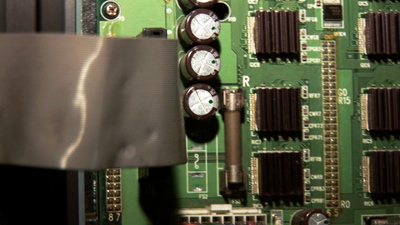 The goal of a tile on the NASDAQ sign is to manage the 16x16 pixels on the surface of the tile. In order to do its thing, a tile has two requirements. First, it needs data to tell it how to light up the 256 pixels. The data contains an intensity level for the red, green and blue for each of the pixels. In other words, 30 times each second, all 256 pixels on the tile need to get intensity information. The controller on the tile decodes this information and drives transistors that send electricity to the LEDs. The tiles all chain together, one to the next, and pass the data from tile to tile.

The second thing a tile needs is power. Each tile uses about 60 watts when all the LEDs are lit at full intensity. The power comes from a set of 700 power supplies that are housed behind the sign.

The entire sign contains about 1,800x1,200 pixels, or roughly 9,000 tiles. That's about the same number of pixels on an HDTV screen (although, on an HDTV screen, the pixels are arranged as 1,920x1,080 pixels). Holding those tiles requires a huge framework of steel that is bolted to the building. In addition, there is a series of catwalks and ladders that let maintenance personnel access and repair the sign, as needed.

The transistors and chips on the tiles all produce heat. So do the 700 power supplies. There's also solar heating when the sun hits the sign during the day. To handle all this heat, 12 large air-conditioning compressors chill a glycol solution that circulates behind the sign.

If those air conditioners were ever to fail while the sign was running, it would be a big problem, especially if someone was working on the catwalks. It's estimated that it would only take a few minutes for the heat to build to 200 degrees or more behind the sign. Anyone working in the tower would bake to death.

Inside the NASDAQ Tower 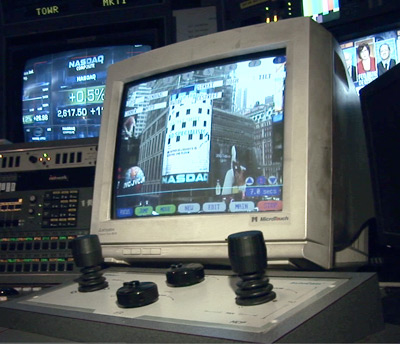 This camera inside the operator's station keeps an eye on the sign for potential mistakes.
©2007 HowStuffWorks

Inside the tower is a workstation where one person decides what will go on the sign. And this is more complicated than it seems. For example, there are holes in the sign that accommodate windows, and when an ad goes up, it often needs to be adjusted so the words don't land in those holes. To this end, the operator can move pieces around. To help, there's a camera located in an office on the other side of Times Square that lets the operator see what the sign looks like to the outside world.

From the operator's station, data flows to a whole rack of computers and controllers that break down the image and figure out how every individual pixel must be lit. These machines format the data that goes to the tiles, and the tiles then decode the data to create the correct image.

The computers pictured on the left control the NASDAQ MarketSite Tower.
©2007 HowStuffWorks

The sign itself uses about 500,000 watts when all the LEDs are on. That doesn't count the power used by the 12 air conditioning units. The tiles and their LEDs turn all of that power into light. The light is able to produce an stunning, bright color display that can be clearly seen both day and night.

For more information on the NASDAQ Tower, the stock market and related topics, see the links on the next page.