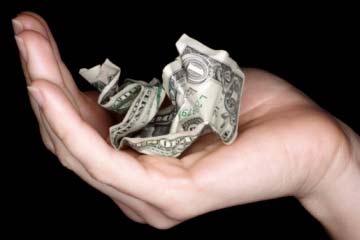 A moneyless world may seem pretty impossible, until you take a step back and look at the big picture. Then the concept starts to look not half bad, and perhaps even superior and more sustainable than the system we practice now.
Jupiter Images/Goodshoot/Thinkstock

Chances are excellent you made a multitude of financial transactions yesterday. Maybe you bought a coffee and a bagel on your way into work; purchased a sandwich for lunch and a snack out of the vending machine later in the afternoon. Maybe you stopped on the way home for gas and groceries, or paid your kids' daycare fees when you scooped them up.

It's possible later in the evening you did a little shopping on the Internet (which you paid to access) and watched some TV (subscription fee again). Did you do the dishes after dinner? That'll show up on your water bill, your electric bill and possibly your gas bill if you have one of those, too. And on it goes, day in and day out.

Perhaps it doesn't have to be that way. A moneyless world operating on a gift economy -- one where people give and receive freely instead of paying for things -- might seem unimaginable, but try to think back and remember the last time you saw a squirrel whip out a credit card to buy an acorn. Thought so. A moneyless world already exists all around us -- the squirrel needs an acorn, the squirrel takes an acorn. A bear needs a fish, a bear takes a fish. But it never takes more than it needs. And that's a very critical point.

The basic idea, which relatively few -- but definitely some -- people actively endorse at this time, is that we're a community of humans, and if we can all rely on one another, then no one has to struggle for basic necessities or suffer in miserable poverty. It's even more basic than a barter system, which is based on trade. It's all about generosity and gratitude, not envy or greed.

For a gift economy to work, everyone would have to continuously focus on being as productive as possible. Things wouldn't work if certain folks did nothing or waited for a handout. Next, if you possessed or produced something you didn't need, you'd give it to someone who did without complaint. If you needed something (and crucially, that's "need," not "want"), you'd take it without feelings of guilt.

During the transition, people would need to focus on decreasing ownership of unnecessary stuff that serves little practical purpose -- although that doesn't mean all technology would be thrown out the window. It does, however, mean that wastefulness would have to be kept to an absolute minimum. Uneaten food, unused parts -- throwing still-useful items into landfills and oceans would need to cease so there was more available for distribution among us.

So how does this play out in real life? Take the people of Anuta, an island in the Solomon Islands archipelago. They maintain a modern gift economy on their tiny scrap of land by practicing a philosophy they call Aropa. Lots of things are shared freely among the families on the island -- everything from land to food -- so nobody ever struggles next-door to prosperous neighbors. All the islanders are responsible for farming patches of land, and since they practice a sort of crop rotation, highly prized yet delicate crops are given freely to families currently stuck farming sturdier, less desirable items.

A few folks on Anuta do occasionally earn money (fisherman, for example, and islanders who travel to other lands to work), but that money is mainly used to purchase manufactured goods which are brought back to the island for people to share and share alike.

So while only a limited number of people now live the moneyless life, could it work on a global scale? It would be a massive transition, and an incredibly complicated shift in cultural ideology, but perhaps someday the time will be right to embrace the lifestyle of squirrels, fish and bears -- as well as the people of Anuta.

If a Robot Takes a Job From a Human, Should It Pay Taxes, Too?
How Will Panhandlers Fare as Our Economy Goes Cashless?
Why do corporations have the same rights as you?