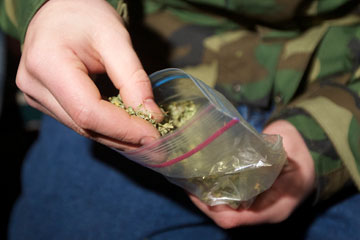 A law legalizing the recreational use of marijuana took effect on Dec. 6, 2012 in Seattle, Wash. Want to learn more? Check out these controlled substance pictures.
©Stephen Brashear/Getty Images

According to Gallup's annual crime survey, in October 2011, half of Americans believed marijuana should be legal in the U.S., and 70 percent surveyed felt it should be legally used to treat pain and other conditions with a doctor's prescription [source: Newport]. That's quite a jump from about a decade earlier, when just 30 percent favored legalization in 2000, and from its days in 1960s counterculture when only 12 percent of Americans wanted to see the drug legalized [source: Mendes]. Legalizing marijuana would make it legal to buy a regulated amount (the recent legalization passed in Washington state limits each person to 1 ounce per week) and partake in the privacy of your own home, but it also opens the door to many questions about the sale and purchase of cannabis and cannabis products, including the one most consumers wonder: How much would legal marijuana cost?

There are a number of things that will influence the price of legal marijuana, including consumer demand and the number of retail outlets supplying marijuana products. While it's still an illegal drug in the eyes of the federal government, the amount of federal involvement and prosecution will also play a role in cost as well as the total generated revenue from state to state.

The two big factors in the cost of legal marijuana are production costs and taxes.

Let's talk about production costs first. With large-scale production, the price to produce a pound of marijuana could drop as low as 20 cents per pound, based on figures from Canada's industrial hemp farms, but that's not exactly an apples-to-apples comparison. When all production costs are factored in for marijuana growers, estimates per pound remain under $20 -- and that's for high-grade quality product [source: Yglesias]. While there's a considerable difference between 20 cents and $20, consider that at today's black market prices, a pound of mid-grade costs about $4,800. Currently, prices for an ounce of marijuana range from about $100 to $200 for an ounce of low-grade to upwards of $400 to $600 for high-end strains [source: Gieringer]. The cost of an ounce of mid-grade marijuana purchased illegally is $300 per ounce, and that could drop as low as $3 an ounce if legalized [source: Gieringer]. It's unlikely prices would drop so low, though, because there's another part of the equation: taxation.

Generating revenue for the state may not factor into the average American's desire to bring home an ounce of marijuana, but that revenue is a driving force behind looser state laws regarding the sale and possession of the drug. The Colorado Center on Law & Policy found that legalizing marijuana and regulating it like alcohol could generate a combined savings and revenue of as much as $60 million per year for the state [source: Stiffler].

With numbers like that, it's no surprise state legalization laws to date have borrowed from those that exist for other intoxicants, including alcohol, and that means you should expect an excise tax on commercial sales of marijuana. For states, legalization is not for fun, but for profit. Local and state sales taxes would also be added to retail sales, depending on the state and its tax laws.

The National Organization for the Reform of Marijuana Laws, or NORML, a nonprofit group dedicated to marijuana education and legalization, has done some estimating and recommends a realistic excise tax of between $25 and $50 per ounce, making it consistent with the taxation on other popular legal intoxicants (cigarettes, in comparison, are taxed about $50 per ounce) [source: Gieringer, Tobacco Control Legal Consortium]. But taxes will vary from state to state. Washington's legalization laws, for example, tax marijuana at 25 percent, and that tax is applied not just at the point of sale to the consumer, but in three different instances: An ounce of marijuana is taxed when legally bought from a special retailer (remember this is just counting excise tax -- sales tax will also be applied, which in Washington state is 6.5 percent, as well as local tax), but that excise tax will also be applied when the grower sells it to the processor and again when the processor sells it to the retailer [source: Smith]. Colorado, too, taxes the sale of marijuana but not as severely as Washington. A 15 percent excise tax is applied to marijuana sales, plus state and local sales taxes [source: Novey].

The price of an ounce of marijuana, however, might not get any cheaper than black market prices until it's a fully legalized product, not just in the eyes of individual states or for medicinal use, but at the federal level too. While state legalization could make cannabis cultivation easier, growers could still face federal penalties, which means large, agricultural farming and industrial operations designed to produce a cheaper domestically-grown product, for example, likely won't happen until full legalization opens the door. Federal rules trump state, and marijuana is considered a Schedule I controlled substance by the Drug Enforcement Administration (DEA).

Would Mexican drug cartels be impacted by legal marijuana in the U.S.? Maybe yes, maybe no. A study released by the Mexican Competitiveness Institute (IMCO) suggests two scenarios. If American marijuana consumers buy a legal domestic product at cheaper prices than Mexican-grown, then yes, the cartels will lose money -- estimated losses are $1.3 billion in Washington state and $1.4 billion in Colorado, where voters approved state-level legalization in 2012 [source: Ramsey]. But what's more likely is the Mexican drug lords take a role in the legal marijuana business [source: RAND].

I think it's going to be an interesting conversation when it happens -- not the one where we talk to kids about drug use, that's a totally different conversation -- but the one where the federal government tries to reconcile the illegality of marijuana under federal law with its legality under state law. How do you regulate and enforce regulations on a plant that can be grown in anyone's backyard or potted garden?