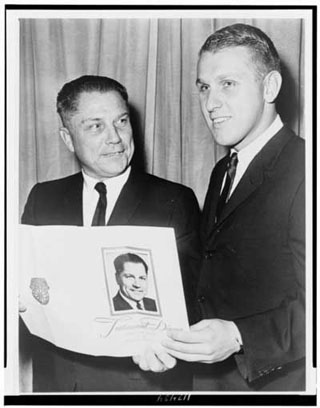 Like his father James R. "Jimmy" Hoffa, who joined the Teamsters as a young man, James P. Hoffa has been a member of the Teamsters for decades, now serving as the union's president.
Photo used in public domain

The country’s most prominent union, the AFL-CIO, is actually a labor federation made up of 54 member unions with more than 10 million members. Change to Win, which was formed in September 2005, is another major labor federation. It encompasses seven unions and 6 million workers. Other prominent unions include the United Auto Workers, the Service Employees International Union and the International Brotherhood of Teamsters. The Teamsters are especially famous for their one-time leader Jimmy Hoffa, whose son is now the union’s president.

While labor unions are not as prominent today as they once were, they still play a vital role in protecting and representing America’s workforce. Sweatshop conditions, at one time thought to be banished from the U.S., have seen a resurgence in recent years [ref]. Poor immigrant workers have been frequent victims of sweatshops. So unions, labor groups and social activists have responded by mobilizing awareness campaigns, lobbying the government for action and talking to clothing companies about whom they contract with [ref].

In addition to monitoring and reporting exploitative working conditions, unions are also important in allowing employees to effectively bargain for their wages and to provide a support system for an employee should he or she suffer from any discrimination at work. Unions provide a check against employers who attempt to encroach upon the rights of workers.

For more information on labor unions and other related topics, please check out the links below.

Jimmy Hoffa was the legendary leader of the Teamsters, notorious for his connections to organized crime but also considered by some to be a heroic labor leader. On July 30, 1975, Hoffa disappeared while waiting for two mafia figures outside the Machus Red Fox restaurant in Detroit, Michigan. Hoffa was declared legally dead in 1982; numerous stories have arisen to explain where his body is (cremation and under Giants Stadium in New Jersey are two popular theories). Since his disappearance, Hoffa has become both a popular culture icon and a symbol of the tangled dealings between some union leaders and organized crime.