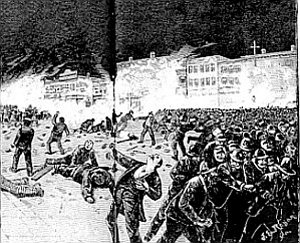 The Haymarket Riot was a watershed moment in the American labor movement and has been frequently memorialized through art.
Image used in the public domain

One of the most infamous and tragic events of this period was the Haymarket Riot. On May 1, 1886, a nationwide strike began that called for an 8-hour workday. Three days later a rally was held in Chicago’s Haymarket, protesting the violent police response to a strike by workers at McCormick Reaper Works the previous day. Because of poor weather, only a few hundred people attended the rally, mostly anarchists and socialists.

When police moved in to disperse the crowd, someone threw a bomb that detonated in the mob. Chaos followed: the police fired shots; some workers may have as well. No official tally of civilian casualties exists, though it’s believed that several died and many were wounded. Seven police officers died and 60 were injured, many by bullets from their fellow officers.

The bomb thrower was never identified, but many anarchists and socialists were arrested. Eight were charged and convicted for “inflammatory speeches and publications” that allegedly caused the deadly violence [ref]. Despite numerous pleas from labor leaders and other activists, four of the convicted were hanged on November 1, 1887. Another committed suicide in prison by placing a stick of dynamite in his mouth. On June 26, 1893, the new Illinois governor John P. Altgeld granted a full pardon to the remaining three convicted men. The event inspired labor leaders to push for May 1 to be an international celebration of workers. Labor Day, known as May Day in some countries, is celebrated throughout the world on May 1. In the United States, Labor Day is celebrated on the first Monday in September, dedicated to “the social and economic achievements of American workers” [ref].

Besides representing a reaction against the ills of industrialization, labor unions also trace their history back to the merchant and craft guilds of medieval Europe. In these guilds, workers would come together to share expertise, support charities, form rules for trade and commerce and lobby local governments. Some guilds and crafts unions made their way to America. In 1886, legendary labor leader Samuel Gompers brought together cigar makers and various craft unions to form the American Federation of Labor (AFL), one of the first major unions in the United States. Almost 70 years later, the AFL merged with the Congress of Industrial Organizations to form the AFL-CIO, an organization that still exists today.