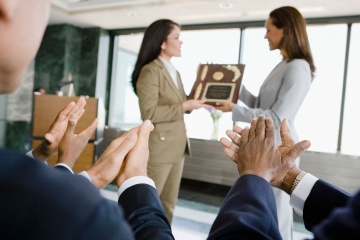 Being recognized for achievement at work is great, but growth potential is also vital for employee happiness.
©Creatas Images/Thinkstock

In addition to good rapport and realistic, well-communicated expectations and goals, recognition and appreciation of achievements means greater satisfaction for employees. It's no surprise that workers who feel their boss isn't paying attention or places more emphasis on the company's bottom line have lower job satisfaction.

While salary, raises and bonuses are important incentives during the hiring and performance review process, in 2012 it wasn't pay that the majority of employees named as the most important factor in their job satisfaction. Sixty-three percent of those surveyed said that the opportunity to use their skills and talents at work was the most important to them, bumping job security – which had held the number one spot consistently since 2008 – into the second spot. Only a little more than half of employees named compensation as very important to their job satisfaction [source: SHRM].

But here's the kooky thing about compensation: It's not what we actually get paid that matters most (although, of course it matters). Rather, it's our perception of how fairly we think we're paid. For instance, if I think you take home a bigger paycheck than I do for doing the same work, we can subtract points from my overall job satisfaction. And it's the same when we compare salaries with those in our field who don't work at the same company.

People who are motivated by their work rather than by their compensation – no matter what that salary amount is — are three times as likely to be engaged at work and report greater job satisfaction than people who approach their work as another day, another dollar [source: Cho].

Even if you do enjoy your work, for many workers there comes a time when it stagnates; you know your job inside and out and, well, it's become a bit of a bore. This is where personal growth and advancement opportunities come into play with regard to overall job satisfaction. Being able to use your talents is the most important dimension in job security, according to the Society for Human Resource Management, and developing those skills through mentoring, training and education programs injects new challenges and variety into jobs. This lets workers not only stretch their skills – and learn a few new ones – but also imagine future potential with the company. Without a clearly outlined path of advancement, we're likely to ossify, and perhaps even develop a cavalier attitude about what we do. New and exciting trumps the mundane pretty much every time.