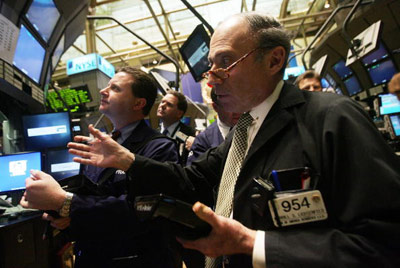 In a free market society, the value of stocks traded (like those on the New York Stock Exchange) is subject only to supply and demand.
Mario Tama/Getty Images

Because the United States has a free market economy, theoretically, the highs and lows in the market should be affected only by supply and demand. According to the free market theory, any institution with enough clout to sway the movement of the market -- like the government -- should stay out of the way and let nature take its course. While the U.S. government doesn't directly intervene in the stock market (say, by inflating the prices of stocks when they fall too low), it does have power to peripherally affect financial markets. Since the economy is a set of interrelated parts, governmental action can effect a change.

The subprime mortgage fallout is an excellent example of what a government can do to try to avert a crash or recession. In 2008, the U.S. government pulled out many stops in an effort to keep the economy from plunging into a nosedive. The government announced it would infuse money into the economy in the form of tax rebate checks, totaling a minimum of $600 per taxpayer [source: IRS]. The hope was that the money would spur Americans to spend on goods and services in America to help revive the economy.

Governments can also help the economy -- and thus guard against stock market crashes -- by infusing cash into banking institutions. The U.S. government's main instrument for cash infusions is the Federal Reserve Bank (the Fed), the network of independent, government-related banks that standardizes, regulates and aids commercial banks in the United States. In 2008, the Fed announced that it had created a new lending arm: the Term Securities Lending Facility (TSLF). The TSLF would offer $200 billion in loans to non-deposit banks (not your neighborhood branch bank). What was so significant about the TSLF was that it accepted debts as securities [source: Bloomberg]. In other words, banks saddled with subprime mortgage-backed securities could use the very same investments that got them into trouble as collateral on 28-day loans from the Fed.

The point of this move is to increase liquidity in the market. A liquid market has lots of buyers and sellers trading assets -- without those assets being discounted, like in a fire sale. The Fed can also indirectly infuse cash by lowering the overnight rate -- the interest rates that banks charge each other for overnight loans. The Fed cut the overnight by three percent from September 2007 to March 2008 [source: Financial Post]. With lower rates and more cash available, the Fed hoped that banks would be more likely to infuse the cash back into investments once again.

The Fed got more hands-on in 2008 when it guaranteed $30 billion of debt when JP Morgan Chase bought out Bear Stearns [source: AP]. Investment banks are the institutions that really inject cash into markets. When these large firms stop investing (or go under), the entire financial system can grind to a halt [source: Farmer]. Investment banks make their money on dividends from their investments, and when they have more cash to invest, the market is stronger.

While the government's intentions to keep the market from crashing may be to protect its citizens' interests, not everyone agrees that action should be taken. Correcting the market can simply prolong the problem, some critics say. The best course of action could be taking no action at all [source: Bloomberg].

For more information on economics and other related topics, visit the next page.