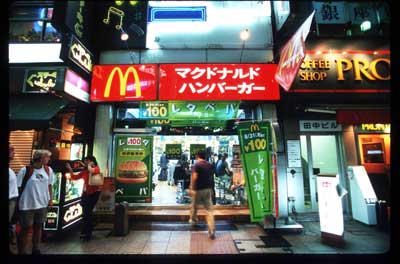 The pairing of glocalization and business originated in Japan during the 1980s. In this incarnation, glocalization pertained to the idea of adapting a global product to fit a local market. By 2000, the term had become a buzzword in big business, with countless companies looking for ways to glocalize everything from hamburgers to Web sites.

After all, if you have a product with international potential, what would be the best way to convince local consumers to buy it? Would you introduce it as is or adapt it to meet the consumers' tastes and needs? Supporters often summarize the philosophy with the slogan, "Think locally, act globally."

McDonald's Corporation is one of the best users of glocalization. Each of its restaurants, in more than 100 countries, offers McDonald's branding, but the actual menus vary to meet the local culinary tastes and dietary requirements. McDonald's restaurants in India offer mostly chicken, lamb and vegetarian dishes since many Hindus don't eat beef. Walk into an Israeli McDonald's and you can order a kosher Big Mac (minus the cheese).

Glocalization often involves a certain degree of trial and error as companies test the strengths of their products on local consumers throughout the world. For instance, when Wal-Mart opened stores in Germany, one of the store's signature practices had an adverse effect on customers. The use of greeters discouraged many German shoppers who were unaccustomed to such obliging customer service.

Glocalization applies to far more than fast food and prime-time programming. Next, let's look at how glocalization is changing the structure of global power.