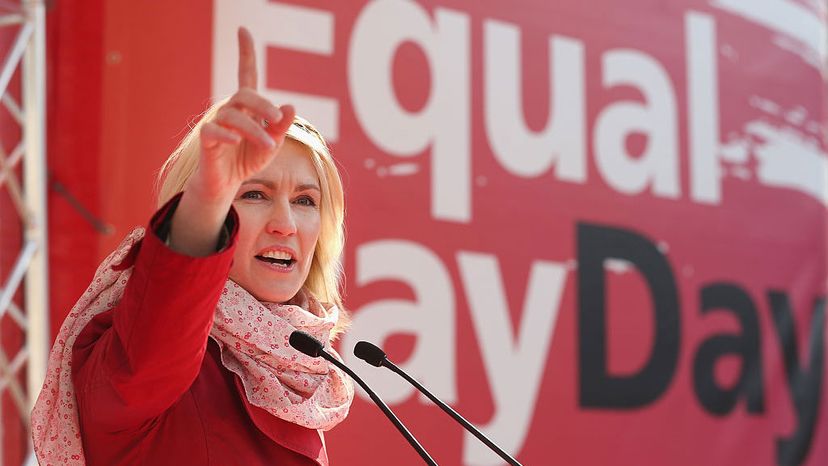 German family minister Manuela Schwesig speaks to men and women rallying for closing the gender pay gap, on Equal Pay Day, March 20, 2015 in Berlin. Equal Pay Day is commemorated in the U.S. and around the world on different dates. Sean Gallup/Getty Images

Would you work two months every year for free? If you're an American woman, you just might. Every April, one Tuesday is dubbed Equal Pay Day by the National Committee on Pay Equity (a coalition of groups working toward equal pay for all sexes and races). This 24-hour period symbolizes the gender pay gap, showing how far into the next calendar year women must work to earn the same amount of money as men. Similar days are also commemorated across Europe.

While comprehensive data on gender inequities in pay wasn't collected until 1950, research shows women were earning a mere 30 cents per dollar compared to men during America's early years, when its economy was largely driven by agriculture. During the Industrial Revolution (1820 to 1850) women fared better, netting 50 percent of the wages men took home; by the early 20th century, that rate inched up to 56 percent (i.e. women earned 56 cents for every dollar men earned).

Despite the fact that Congress mandated equal pay for equal work in 1963, the wage gap remained at 60 percent for years. In the 1980s it began to climb again, rising to around 75 percent. But some 30 years later, (the latest available statistics are for 2018) the gap had only nudged up to 81 cents per dollar, according to the U.S. Dept. of Labor. Still, this is slightly better than 2015, when the gap was around 80 cents per dollar.

Economists say one-third to one-half of the gender pay gap may be explained by differences in education, experience and the number of hours worked. But the reason for the remainder is a bit of a mystery, although many say it's due to gender discrimination. To put the pay gap in perspective, consider this: In 2019, a typical 25-year-old woman employed full-time earned $5,000 less per year than her male counterpart. If that gap persists until those employees hit age 65, she would have lost out on more than $406,000 compared to the man, an astonishing figure.

The gender gap is even steeper for women of color. In 2017, according to Census data, white women working full-time, year-round earned median annual incomes that were 77 percent of what their white male counterparts scored. For African-American women, the figure dipped to 61 percent; for Hispanic females, it was a dismal 53 percent. Only Asian women fared better than white women, earning 85 percent of what white males did.

In fact, the American Association of University Women pegged "Equal Pay Day" for African-American women as happening some time in August and way down in November for Latina women in 2019.

How is the Gender Pay Gap Determined? 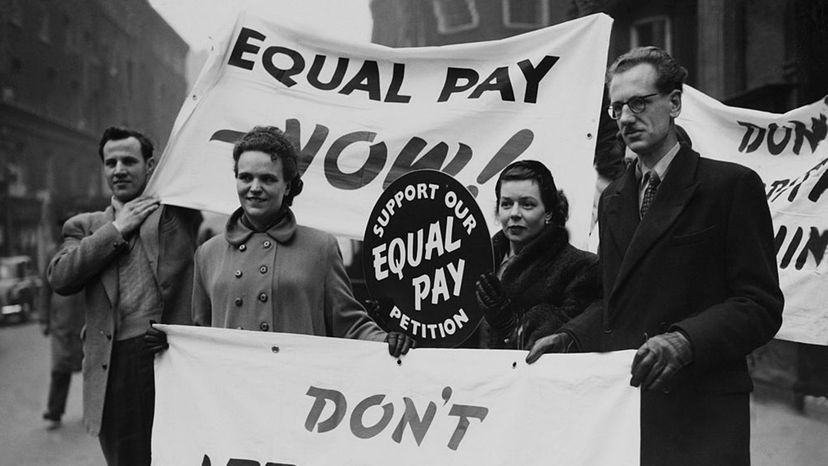 Rallying for equal pay is not a new concept. Back in 1954, this group demonstrated in London for the cause. © LAURENT GILLIERON/Keystone/Corbis

The gender pay gap figure is typically calculated by first adding together all of the annual salaries of women who are working full-time, year-round, then finding the median salary — that is, the salary that's in the exact middle, with 50 percent of the women earning more than that figure and 50 percent earning less. Then the same calculation is made for men working full-time, year-round. Once those two figures are determined, you can compare them and calculate the pay gap [source: Glynn].

As an example, let's look at income data for 2016. According to the U.S. Census Bureau, in 2016 the median salary for men working full-time, year-round was $51,6400, while the similar figure for women was $41,554. This translates to a wage gap of roughly 20 cents per dollar. Or, to put it another way, women earned 80.5 percent of what men were taking home that year, an increase of 1.1 percent since 2015 -- and the first annual increase since 2007. Some attribute the narrowing pay gap not so much to women's salaries increasing but more to men's salaries decreasing [source: Gillman].

While this is the most commonly used method to compute the gender wage gap, it's not the only one. Sometimes weekly salaries are used for comparison purposes, which nets slightly different results [sources: Semega, et al., Glynn]. For instance, the Bureau of Labor Statistics calculates using median weekly earnings and has the pay gap slightly less, at 82 cents to the dollar.

Keep in mind that you can't look at one statistic and make sweeping characterizations about pay inequities. Here's a quick example why. In 2016, the same U.S. Census Bureau data showed females heading a household solo earned a median income of $41,027, while men heading a household sans spouse netted $58,051. That's a gender wage gap of 30 cents per dollar. In single-person households that same year, men earned $31,749 and women $30,572 for a 27-cent gender pay gap. Both of these wage gaps are quite a bit larger than the 20-cent figure noted above, potentially telling a different story about the reason behind pay inequities [source: Semega, et al.].

Not everyone agrees that there is a true gender pay gap. For starters, the calculations compare the salaries of all working women to all working men, yet these women and men don't all hold the same jobs. That is, the figure isn't comparing male doctors with female doctors or male electricians with female electricians. And even if it were, most employees have different educational and employment backgrounds, two factors that greatly impact salary [source: Glynn].

Another point to keep in mind is that both women and men tend to cluster around certain occupations. About 45 percent of all working women are employed in just 20 fields, including secretaries and teachers; among men, one-third work in the top 20 male occupations, which include managers and supervisors. Overall, the cluster of occupations women favor tend to pay less than those favored by men. Some experts say such job-clustering accounts for about half of the gender pay gap [source: Glynn].

Childcare is another reason men and women don't always earn the same amount of money when working at the same occupation. If a woman takes time off after giving birth, for example, she will have less tenure than her male counterparts when she returns to the workforce, and may lose out on wage increases. Some experts add that more women than men seek jobs that are close to home and that offer flexibility and personal fulfillment, which creates competition for these types of jobs and thus holds down wages. Men are also more likely to take on jobs that are dangerous or physically demanding, but offer greater pay, like truck driving or construction work [source: Farrell].

Critics also point out that when you compare the wages of men and women with similar credentials who are working in similar fields, there isn't much of a wage gap at all (although the men will almost always out-earn the women). A few examples: Among elementary school teachers and human resources administrators the pay gap between men and women is 1 percent; for registered nurses and computer systems administrators it's 2 percent; for software developers and construction project managers it's 4 percent [source: PayScale].

Nevertheless, some say that after controlling for similar education, occupation and work experience and race, there is still a 38 percent wage gap that cannot be explained by measurable factors [source: Holmes and Corley]. Of the 534 occupations tracked by the Bureau of Labor Statistics in 2016, a scant four paid women more than men. These included sewing machine operators and fast food workers. 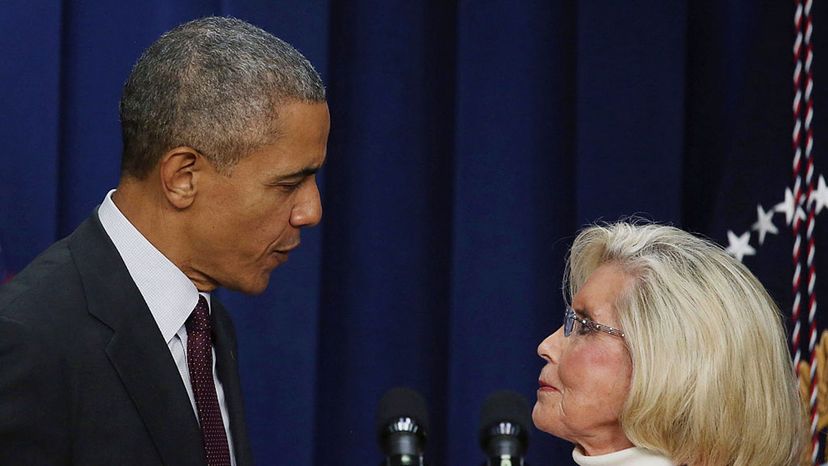 U.S. President Barack Obama stands with Lilly Ledbetter on the seventh anniversary of the signing of the Lilly Ledbetter Fair Pay Act, at the White House, Jan. 29, 2016. Mark Wilson/Getty Images

One of the reasons the gender pay gap continues to exist is that many women have no idea they're receiving discriminatory pay. If you're a woman and don't know that you're being paid less than the guy one cubicle over who has the same experience as you and is performing the same job, then how can you ask for fair treatment? Experts say the way to combat this is to start discussing salaries with your coworkers, family and friends. Unfortunately, many Americans, especially mid-level employees at private corporations, where salaries aren't public information, shy away from talking about their wages [sources: Narrow the Gapp, Wolgemuth].

In some countries, people are much more open about their salaries. But in the U.S., too often income is linked with success and self-worth. Thus, people with low incomes are embarrassed to disclose that fact, while many rich folks decline to say anything out of guilt or fear of resentment.

In May 2015, Lauren Voswinkel created the hashtag #talkpay and encouraged people to tweet their job titles, experience levels and salaries to help combat wage discrimination. Shortly after that, the Twitter handle @talkpay_anon debuted, which lets people post to #talkpay anonymously. A quick read of the #talkpay tweets reveals a wide variety of income information, plus ideas on ways in which women can boost their bottom line, such as negotiating pay increases. (Some critics of the gender wage gap theory say part of the reason for it is that men are better salary negotiators) [source: Fleming]. Websites have also popped up that let you compare your salary with that of others, such as Comparably and PayScale.

A February 2016 survey by jobs and recruiting site GlassDoor shows 39 percent of American employees working at a company with a gender pay gap think the government should enact legislation requiring equality. California has already done so, first requiring businesses to pay people the same wage if they're performing the same job, and in January 2016 strengthening that law by requiring equal pay for people doing "substantially similar work" [source: Isidore]. California also passed a law in 2018 that prohibits employers from asking prospective employees about past or current salaries. This was already enacted in some other states as well [source: Nolo].

Hopefully, all of these actions will pay off. Because if the gender pay gap continues closing at the same glacial rate, it will be around 2058 before parity is finally reached [source: Narrow the Gapp].

Who Was Lilly Ledbetter?

In 1979, Lilly Ledbetter went to work for Goodyear Tire and Rubber Company in Alabama as an overnight supervisor. Shortly before her 1998 retirement, an anonymous coworker slipped her a note saying she was being paid far less than three of her male counterparts. Ledbetter sued Goodyear for restitution. The case went all the way to the U.S. Supreme Court, which ruled 5-4 against her because she did not file a claim for compensation within 180 days after receiving her first discriminatory paycheck. In 2009, President Barack Obama signed into law the Lilly Ledbetter Fair Pay Act, which says workers can sue an employer up to 180 days after receiving anydiscriminatory paycheck, not just the first one [source: Pickert].

Gender pay gaps are interesting. As someone who is self-employed, it's hard to compare my earnings with another writer because our jobs are typically so different. I choose to write for consumer media and not so much for corporations, where the pay is better. I supplement my writing with editing jobs and proofreading; others add speaking and teaching to pad their bottom line. But here's one interesting thing. The freelance writing field is heavily dominated by women. Yet many of the top-paying, most prestigious publications routinely assign their most desirable features to men. An editor at one of these magazines said he was not biased toward men at all. Rather, more male writers were submitting lead-feature ideas than women. In his opinion, women writers were just as skilled as men, but more intimidated to query his magazine. There is likely some truth to that. However, after decades of working in this field and hearing and observing writer-editor interactions, there is definitely some measure of bias against women, at least among some editors and at certain publications. 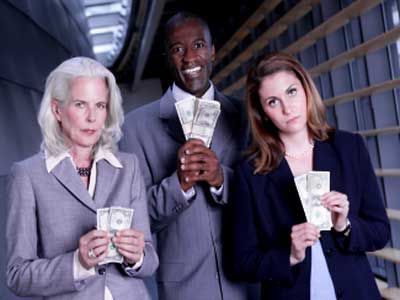 Up Next
Is there a gender gap in the workplace?
Explore More 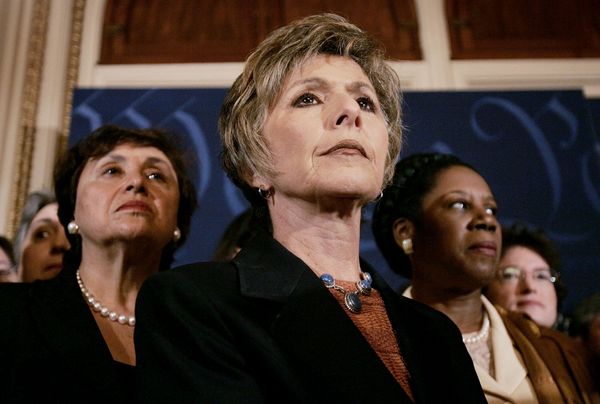