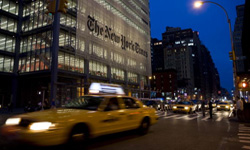 To suppress free speech is a double wrong. It violates the rights of the hearer as well as those of the speaker." Frederick Douglass, 1860.

Douglass' words echo the beliefs of the founding fathers, who considered freedom of the press so important that they established its rights in the First Amendment to the U.S. Constitution. The press played an important role in the events leading up to and during the American Revolution, when newspapers helped spread information about the struggle for independence from Great Britain across the colonies. The founders fought to preserve the very freedoms that helped the young nation to gain support for its ideals.

Once freedoms of the press were established in the Constitution, the press continued to be an important force as the country grew. Freedom of the press in the U.S. covers invasion of privacy, free expression, access to government information, prior restraint (preventing publication of information), commercial speech, libel (written attacks on an individual's reputation) and slander (spoken attacks on one's reputation).

Throughout our country's history, cases heard before the Supreme Court have tested the First Amendment and helped continue to shape the rights of journalists. Let's take a look at 10 important Supreme Court cases that have had an impact on the media.