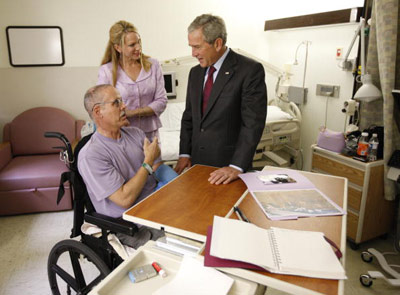 Nearly all of the medical supplies and equipment used on Project HOPE's international missions are donated by some of the biggest names in the pharmaceutical and healthcare industry: Merck, Eli Lilly, Pfizer, Wyeth, Schering-Plough, Bristol-Meyers Squib, Johnson & Johnson, 3M and many more.

In 2008, these partners combined to donate $119 million in corporate gifts-in-kind. Merck, for example, has donated one million hepatitis A and hepatitis B vaccines to Project HOPE missions since 1999. Most recently, the vaccines have been used to immunize healthcare workers in Central Asia and Russia.

Project HOPE also works with corporate partners who offer financial and volunteer support as well as marketing assistance. Companies like Boeing, ExxonMobil, 7-Eleven and Morgan Stanley help spread the word about the organization through product marketing and outreach efforts.

On an international level, Project HOPE is a member of several global aid networks, including InterAction, Global Impact, Partnership for Quality Medical Donations, AlertNet and others that help coordinate the work of dozens of independent charities. These larger networks ensure that the resources of each member organization are being used most effectively and that no group duplicates the efforts of another.

Keep reading for links to more inspiring stories from HowStuffWorks.