Is it worth it to donate your used car to charity? 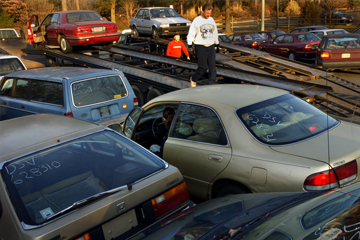 The Salvation Army is one organization that often takes car donations. Is donating your vehicle right for you?
Katherine Frey/The Washington Post/Getty Images

It's easy to assume that donating a jalopy is easier than trying to sell it. And, the thinking goes, even though a donation won't result in a pocketful of cash right away, it'll pay off at tax time when the donation results in a bigger tax refund. Unfortunately, that's not necessarily true.

The IRS is taking a harder look at vehicle donation deductions to make sure taxpayers' paperwork accurately reflects their donated vehicles' value. In the past, taxpayers who donated vehicles got to claim a deduction based on the car's fair market value, but these rules have become more complicated.

While the IRS' rules about vehicle donations to charity are long and complex, they boil down to two important points. First, the amount you can claim still depends on the vehicle's fair market value (the amount you could sell it for), but it also depends on how the charity ends up using the vehicle — and that alone makes donation potentially more complicated than simply selling the car. In other words, you won't know how much the deduction is worth when you make the donation. And you're also responsible for following up with the charity, finding out how the vehicle was used and justifying the deduction claimed on the tax return. (The IRS website has all the information needed to figure out the allowable deduction based on specific situations.)

For many donors, the biggest deduction they can claim is $500 — and only if they itemize their deductions at tax time. Between the legwork involved and the uncertainty of the financial benefit, donating a car to charity just isn't worth it for some people.

While it takes some effort to properly and legally claim the tax deduction, that's only half the story. Second important point: It's important to ensure that the charity has a good track record for using donations effectively. A good place to start is on one of the many websites designed to help potential donors research charities. Next, make sure your chosen charity actually wants the car (if they can't use it, it'll be a waste of time and resources for them to deal with it). They might use it for their own vehicular needs (such as delivering supplies), sell it or fix it up for a needy family. Whatever the car's ultimate destiny, the charity must be willing to give you the information you need to complete your taxes properly. Otherwise, the whole question becomes moot.