by Alia Hoyt Feb 10, 2017
Is your cluttered desk a sign of creative genius or total chaos? Experts weigh in. Jetta Productions/Getty Images

The eyes might be the windows to the soul, but your desk lets people see right into your brain. OK, maybe that's a stretch, but it does beg the question: Messy or not, is your desk an accurate reflection of how you work and operate? Expert opinions might surprise you.

Clinical psychologist Dr. Ben Michaelis says if someone keeps a messy desk, people might think that means they're generally disorganized, too. "It's a visual metaphor for their mind," he explains. "If their ideas are all over the place, their things and thinking and focus can be too."

However, Michaelis is quick to point out that being comfortable in your workspace is more important than having a gleaming desk. "Someone who is fastidious to have a messy desk for a little while would probably not be conducive to creativity, but for people who like to play in that messiness it probably does work out," he says.

In fact, workers with messy desks are known creative types, which has been shown time and again in various research studies. They also tend to excel at prioritizing and delegating tasks because they can see the big picture and what needs to be done to achieve it, explains Kelly McMenamin, co-owner of professional organizing firm Pixies Did It and co-author of "Organize Your Way: Simple Strategies for Every Personality." "They see what's really important, but ignore the smaller stuff that others obsess over. But sometimes they miss the details," she says.

By contrast, "[people with] clean desks get a lot done, but not always the most important stuff. They're more likely to be micromanagers, involved in the details," McMenamin says, adding, "in general, people who like to have clear surfaces want to control their own environment more."

People with messy desks rely on visual memory to excel at task management, so if papers are filed away they're subsequently "out of sight, out of mind." Often, they subscribe to the practice of "piling" to keep ideas top of mind. While stacks of files and papers might seem like bedlam to those Type A co-workers out there, it's often just the opposite. Such piles "might appear messy to others," McMenamin says. "But for these folks it doesn't stress them out; they know where things are and really hate when people come and organize."

Many experts believe that our brains are hardwired early on to prefer certain organizational methods. "Right-brained, creative people tend to think in images and words," writes professional organizer Maeve Richmond in an email. "Left-brained people experience things differently. Their more logic-centric brains look for linear and analytic solutions to life. For them, visual clutter can be daunting, distracting them from the task at hand."

Although messiness has traditionally been frowned upon, the workplace could be growing more tolerant. Staffing service OfficeTeam conducted a 2015 survey that found that two-thirds of HR managers perceive a cluttered desk to be at least somewhat acceptable. "Some say that a messy desk can be the sign of a creative mind because professionals in creative fields often leave things out in their workspaces to give them inspiration," explains OfficeTeam district president Brandi Britton in an email. The tables can turn easily in cases of excess, however. "Disorderly desks can be an eyesore and even a distraction in some cases," she writes.

When done right (perhaps with a bit of organizational help), messy desk users can thrive just as well as the next guy. In fact, a number of highly successful, powerful individuals have admitted working in a chaotic desk environment, including President Donald Trump and former President Barack Obama. This can be seen as further reinforcement of messy-desk keepers as big-picture focused delegators, or it could just be a necessary evil of high-level positions.

"The volume of information that a president has to manage, I honestly can barely understand it," Michaelis says. "I would imagine it would have to be quite messy just to accommodate the different strains of running this country."

Adds McMenamin, "Nobody's 100 percent either way, including presidents and I'm talking about actual working desks, not where they do photo-ops or in a photo taken after their assistant tidied things up for them."

Now That's Cool
Albert Einstein was known for his intellect, as well as his colossally messy desk. He famously shut down naysayers when he said, "If a cluttered desk is a sign of a cluttered mind, of what, then, is an empty desk a sign?"

Fukushima Radiation Readings Are Extremely High … But Let's Not Freak Out

Fascinating, Fun and Freaky: Our Best Stories You Might Have Missed This Week 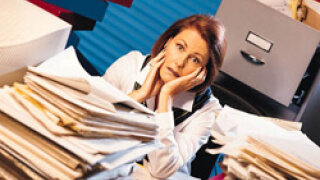 5 Tips for Getting Organized at Work