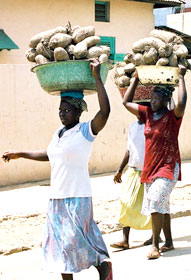 The forms and functions of currency have changed over the last 3,000 years or so, generally falling into four categories:

The development of commodity-based currency systems represents more of a blurring between barter systems and later currency systems than a revolutionary change. In a commodity system, the money used is not only a "place-holder" for purchasing power, but it is something that has an inherent value by itself.

A good example of a commodity system is the one used by the Aztecs. They placed great value on cacao beans, which could be used to make chocolate. The beans were small and easy to carry, so they were often used to balance out or make change in barter agreements.

The benefit of commodity money, according to anthropologist Jack Weatherford, is that, "unlike paper money and cheap coins that can easily lose their face value, commodity money has a value in and of itself and thus can always be consumed no matter what the status of the market."

There are still drawbacks to commodity money. It is often perishable and bulky. Cattle were used frequently as commodity currency in agrarian societies. They worked well as a medium of trade, because everyone in that society placed value on them but they were hard to transport.

The value of a commodity currency seldom extends beyond the borders of the culture that uses it. If a herder from the country wants to trade with a city dweller, his cattle aren't going to have much value. European explorers dumped entire boatloads of cacao beans because they didn't value them like the Aztecs did.