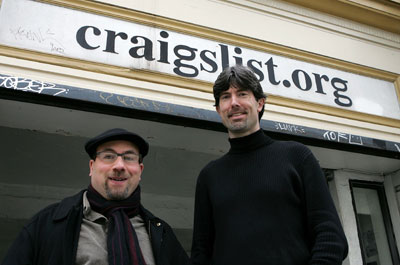 Craigslist started as a pet project but blossomed into a full-fledged company. In 1999, craigslist incorporated as a for-profit organization. The company also purchased the domain craigslist.com to prevent anyone from buying it and misleading craigslist members. Each year since then, craigslist has expanded to cover more cities and communities, becoming a powerful financial force in the process.

Craig Newmark and Jim Buckmaster aren't your typical corporate bigwigs. Even though Newmark is the founder and chairman of craigslist, he states his title as customer service representative. Buckmaster is not only the CEO but also a lead developer for the site. He helped design the homepage, Web architecture, forums, community moderation system, personals category and search engine.

Newmark and Buckmaster strive to keep craigslist a service-based company focused on online communities. They have refused offers to sell the company for a huge profit. Many of their decisions fly in the face of traditional business strategies, but Newmark has said that keeping the communal culture of craigslist intact is more important than making enormous profits [source: craigslist.org]. Even the site's offices are unusual for an Internet company -- instead of a flashy office in a building made of glass and steel, craigslist's headquarters are in an old Victorian storefront in San Francisco [source: Associated Press].

The site earns revenue by setting fees for job postings in a few cities and for apartment listings in New York City. The job posting fee in Boston, Los Angeles, New York City, San Diego, Seattle and Washington, D.C. is $25, while the fee in San Francisco is $75. The fee authorizes the user to post a job in one category -- if the user wishes to post the same job in multiple categories, he or she must pay a fee for each one. The apartment listing fee in New York City is $10 per brokered apartment rental ad. Job and housing ads in other cities are free.

The site generates enough revenue to support its entire staff of 25 people. The company doesn't publicly release its financial results, but estimations range in the millions of dollars -- $7 million for 2003 and more than $20 million in 2005 [Business Week, c|net News].

Though craigslist's corporate philosophy focuses on making a positive impact in the community, not everyone using the site shares that point of view. Some craigslist members use the site to take advantage of other people.

In the next section, we'll look at some of the controversy surrounding craigslist.

Selling Out is a Joke

On April 1, 2002, craigslist featured a news item announcing that the site would begin running banner ads immediately. The announcement contained a price list for ad space and a form for prospective advertisers. Most craigslist members recognized what the announcement was: An April Fool's joke. But a few took the announcement seriously, believing that Newmark was selling out to big business. By the next day, all was back to normal with no banner ads in sight [source: craigslist.org].