If you just want to give something away, like your old laptop, you have any number of outlets. Your local newspaper probably has a free section in the classifieds; you can post it on Craig's List; you can drop it off at a thrift store or donate it to a charity that will refurbish and resell it. But if you want to give away your old laptop and be part of a potential revolution in the process, you might turn to Freecycle.org. The Freecycle Network hopes to encourage a "worldwide gift economy" -- one old laptop, bottle of nail polish, gas stove or People magazine at a time.

In this article, we'll find out how the Freecycle Network got started, how the process works and how you can start giving your unwanted stuff away to people who'll use it.

The Freecycle Network has a lofty goal: to establish a "worldwide gift economy" that cuts down on waste, decreases consumerism and connects people through giving. Freecycle members post e-mail offers for stuff they don't want anymore to a listserv for their local group. If another member is interested in the stuff, he replies to the poster. The poster then lets the interested party know when and where he can pick up the stuff. If more than one member is interested, the giver has to pick someone from all of the interested members. Many local charities join Freecycle groups, and most groups ask that you give a nonprofit first dibs. That way, your local thrift store doesn't lose out through the success of Freecycle.

If you're thinking, "Sweet, presents!", think again -- according to the official Web site, your local Freecycle group is not a place to just grab up "free stuff for nothing." A gift economy is a two-way street. Don't take it if you don't need it, and remember that it's a gift, not a freebie. If you're looking to get something for nothing, you should probably just check out the "Free" section of your local Craig's list or newspaper.

Freecycle is an idealistic endeavor, to be sure, but it's working. The network was born in 2003 in Arizona, the brainchild of Deron Beal. Beal worked for an environmentalist group in Tucson, trying to keep usable goods out of landfills through education. The nonprofit he worked for had a bunch of office supplies it didn't need, and Beal spent hours locating other nonprofit groups that needed what his group was trying to give away. He realized he could easily set up a listserv where people could see what was available and what was needed and save everyone a lot of time in the process. Thus began Freecycle.

In December 2005, there are more than 1.8 million members in 3,200 Freecycle communities in 50 countries around the world. The Freecycle Network reports that its members are keeping 55 tons of goods out of landfills each day. Let's find out how it works.

According to the EPA, people in the United States keep 64 million tons of garbage out of landfills every year through recycling. 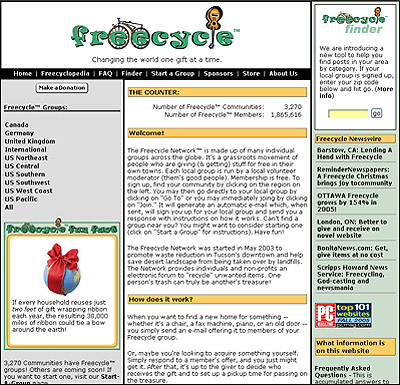 Joining a Freecycle group takes about two minutes. You visit Freecycle.org and click on the link for your region.

The next page lists all of the Freecycle groups in that region. In the U.S. Central region, for example, there are 833 groups as of December 2005. So you look for a group in your area. If there's no group near you, you can actually start one up (see "Starting Your Own Freecycle Group" below). If there is already a group in your city or town, you can click on its "GoTo" link to visit the Web page for that group or just click on "Join" to register. Some groups require membership approval. If your local group does, you just fill out a few profile details and write a short message explaining why you want to join. The volunteer moderator for that group approves your membership and sends you a series of e-mails explaining how the process works.

Freecycle groups accept a huge range of free stuff, but there are some rules about what you can offer. It has to be legal, meaning no moonshine or drug paraphernalia, and it must be "family friendly" -- if you're looking to give away your old girlie mags, a bottle of vodka or a gun you bought on a whim, look elsewhere. You're usually allowed to offer a pet to a loving home, but you cannot offer an animal for breeding or other purposes.

Let's say we have an old printer just collecting dust in the closet. Our local Freecycle group might want it, so we'll offer it to our fellow group members. The system is pretty simple:

Although giving is the main idea, you can ask for things you need, too. It's important not to abuse this privilege or ask for luxury items, because you'll quickly get a reputation for being greedy (and therefore not worthy of receiving gifts). But if you need something, and it's the kind of thing someone might stick in the basement and forget about, like an old space heater, it's okay to let people know you want it. You simply send out a message with the subject line "WANTED: Space heater." If you get any responses, you arrange a pick up, followed by another message with the subject line "Received: Space heater" so everyone knows your need has been met and they don't have to keep combing through their attic for that space heater they swore they stuck up there 10 years ago.

And that's it! A few e-mails, a short exchange with a fellow member and you get to feel all warm and fuzzy inside. Everybody wins -- so it might seem strange that many people are angry with the Freecycle Network for what they perceive as the corruption of a good thing. 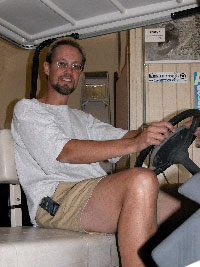 Like most good ideas that become good business models, the Freecycle Network is not the grassroots movement it once was. As it gets more media attention and more members, the founder is making some decisions that many early members aren't happy about.

First, Deron Beal is taking flak for what his volunteer moderators see as micromanaging. Moderators used to have exclusive "ownership" of their local group, but in 2004, Beal decided that every local group should add him as an owner with moderator privileges. According to Beal, it was necessary because some moderators had simply stopped moderating and there had to be a way to pick up the slack. Many members want Freecycle to remain a loose, grassroots network with no centralized control, but Beal seems to have other plans. His fight to defend the trademarked "Freecycle" has alienated part of his anti-consumerism, anti-big-business base. A visit to the Freecycle Web site lets everybody know that "Freecycle" is an adjective and only an adjective. Media representatives are not supposed to use the word "Freecycle" as a noun, a verb or any other form of speech. We can't say "Freecycling," "Freecycler" or "Freecycle it," lest the word become generic. (Avoiding these words is harder than it may seem!)

The other point of contention has to do with the Freecycle Network's sudden corporate sponsorship. In 2005, Beal accepted $130,000 in grant money from the Waste Management (WM) garbage-collection company. Many members of the Network are happy to receive the gift from WM. The problem is that WM has a very poor environmental record, raising questions as to whether the partnership is really a good fit. And in any case, some members of the Freecycle Network were unhappy to learn that their grassroots movement had received a lot of money from the largest waste-collection business in the United States. Several local Freecycle groups left the network and started their own gifting group, abandoning the Freecycle name. One such spinoff is FreeSharing.org, which states on its homepage, "The sites featured on FreeSharing.org are 100% locally owned, grassroots sites, working to help their neighbors and the environment." FreeSharing.org uses the term "Free-Recycling" to describe its activities.

Regardless of the apparent strife within the Freecycle ranks, the movement is still going strong. It plans to expand its operation until it has a presence in every town in every country in the world. Future plans include local education programs to teach people about recycling and waste reduction, and part of the WM grant money will be used to leave Yahoo! Groups and set up independent Web sites that allow for new organization techniques and search tools. The goal is to ease the burden on local moderators and allow for more automation and organization in the gifting process.

For more information on the Freecycle Network and related topics, check out the links on the next page.

Starting Your Own Group

There's a link on the Freecycle.org homepage that says "Start a Group." All you have to do is fill out an application and submit it for review. If there's already a group in your area, you can't start a separate one. Remember, every Freecycle group needs a moderator, and if you're starting a new group, that moderator is probably you. See Start your own Freecycle group to learn more.