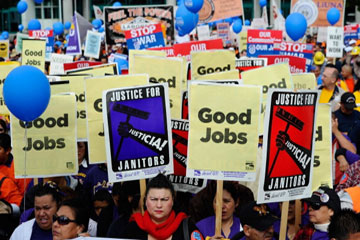 We often hear about contract negotiations in the entertainment world, as actors, directors and other luminaries enter "talks" to line up their next projects. We hear about them in sports, often in terms of multiple years, millions of dollars and now, looming lockouts. These negotiations may be dramatic, but we often forget that these actors and athletes are laborers governed by unions. As failed contract negotiations in professional sports and attempts to strip bargaining rights from public workers once again make headlines, it's easy to overlook the long and often bloody history of American labor management relations.

In 1935, Congress passed the National Labor Relations Act (NLRA), legislation that first established the basic rights of private sector employers and employees to fairly and peaceably resolve labor disputes. The NLRA sets the ground rules for collective bargaining, a process by which organized groups of workers and management can negotiate wages, hours, benefits and other terms of employment without relying on litigation or resorting to intimidation. President John F. Kennedy extended the same collective bargaining rights to federal workers in 1962 [source: Woolley]. Most states also have their own labor laws, but no state law can supersede the NLRA.

Under the NLRA, if workers vote to unionize through elections run by the National Labor Relations Board (NLRB), then management is required to sit down with union representatives and hammer out a collective bargaining agreement. This legally binding contract stipulates exactly how much workers will earn, how many vacation days they will receive, how to officially file a grievance and whether or not it's legal to go on strike. When the collective bargaining agreement expires (usually in three years), the parties meet again at the negotiating table to work "in good faith" to establish wages and terms that are fair to both sides. If those negotiations fail, out come the picket signs.