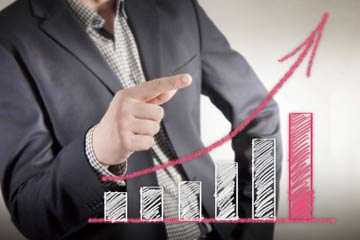 Should you buy or should you hold? This article might just have the information you need to make the right stock decision. See more money pictures.
iStockphoto/Thinkstock

The goal of stock market investing is deceptively simple: buy low and sell high. It's deceptive because no one — not even Warren Buffett — knows precisely when an individual stock price has hit its low point, making it the absolute best time to buy. Likewise, no one knows the exact moment when a stock price has peaked, making it the ideal time to sell.

But what were investors and market analysts saying back on March 9, 2009? Thomas Nyheim, a portfolio manager at Christiana Bank & Trust Company, told CNN Money that he didn't expect stocks to rally until later that year, describing investors as being "in defensive mode. They've seen too many losses and are sitting on the sidelines" [source: Twin].

On Feb. 1, 2013, the Dow broke the 14,000 mark for the first time in more than five years [source: Cox]. If you had the uncanny foresight to buy large amounts of stock on March 9, 2009, you would be a very happy — or at least wealthy — individual. But like most people, even the "experts," you had no idea when the market was about to rebound.

Spotting a market rebound is hard enough, but today's question is downright confounding. How can you tell if an individual stock is about to rebound? The good news is that nearly the entire field of stock market analysis is devoted to this very question. The bad news ... even the smartest portfolio managers in the world still get it wrong.

Individual stocks do not exist in a bubble. Every publically traded stock is part of a larger financial sector. Here are some examples of market sectors and the companies that belong to them:

As a general rule, you can expect all of the stocks within the same sector to perform roughly the same [source: Abraham]. There are exceptions to this rule, of course, especially in the short term. If Nokia reports more smartphone sales than Apple, you might see a momentary bump in Nokia stock and a drop in Apple. But if you look at the bigger picture, you can expect both Nokia and Apple to follow the long-term trends in the consumer electronics sector.

How does sector analysis help you guess when a stock has hit its bottom and is about to rebound? If an individual stock generally tracks the performance of its sector — at least in the long term — then you can compare the performance of the stock to its sector to predict future price movements.

As a hypothetical example, let's say that Yum! Brands — which owns Pizza Hut, Taco Bell and KFC — saw its stock price drop 5 percent over the past year. In the same time period, however, the entire "leisure services" sector has grown 10 percent. Unless Yum! Brands is having some serious problems — major lawsuit, CEO in prison, employee strike — we can reasonably expect it to ride the trend of the rest of the sector.

What does that mean? It means that even though Yum! Brands is down, it's probably not down for long. In fact, a rebound might be on the horizon.

The 'All In' Myth

Smart investors don't try to spot a stock's bottom and then go "all in." Instead, they invest incrementally using a technique called "wide scales" [source: Cramer]. If you think a stock is close to reaching bottom, you buy only a few shares initially. With every point that the stock drops, you buy even more shares. Using this scaled investment strategy, you buy more when it's cheaper and lower the odds of blowing all of your money on a high price. 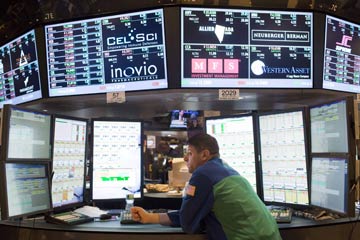 A trader works on the floor of the New York Stock Exchange.
© ANDREW BURTON/Reuters/Corbis

Share price is not the only indicator of the strength of a specific stock. When market analysts look for a stock with rebound potential, they pay particular attention to the relationship between stock price and trading volume.

First, let's define volume. Volume is a simple measurement of how many shares of stock changed hands during a single day of trading. It's important to note that each share has both a buyer and a seller. If a company's trading volume goes way up or down on a particular day, that's a good indication that investor interest in the stock is changing. If we throw stock price into the mix, we can start looking for signs of a rebound.

Here's how it works. If a stock's share price goes down, but trading volume is relatively low, that's called a weak move [source: Mitchell]. In other words, if volume is low, then investor interest is low, which isn't a strong indicator of a rebound. You need a lot of interested buyers to drive a stock price up; it's the law of supply and demand. The more demand for a stock, the more money investors are willing to pay for it.

If you are trying to predict a rebound, first you want to look for a sustained period of declining share price and a similar decline in volume. Then, just as trading volume tapers off, you want to look for a day — or an hour, or a minute! — in which the stock's share price still declines slightly, but there's a spike in trading volume. This is a sign that the last sellers are finally out of the market and buyers are now taking over [source: Mitchell]. If the buying trend continues, the stock price will rebound and you will have gotten in on the bottom floor.

Of course, you want to make sure the company itself is financially sound so that you don't end up with a bunch of worthless stock.

Stock analysts have developed a number of useful formulas for tracking this critical relationship between volume and share price. If you are serious about trading stocks, you should learn more about indicators like on-balance volume, Chaikin money flow and the Klinger volume oscillator.

Author's Note: Can you tell if a stock is about to rebound?

In its purest and somewhat sentimental form, an investment in the stock market is a vote of confidence for the future performance of a company or industry. If I buy shares of stock in General Motors, it means that I believe that GM will continue to innovate and outsell the competition. When the Dow Jones goes up, we generally equate that with growing confidence in the American economy. But how much does stock price and investment trends have to do with the actual financial performance of American businesses? And how much can be attributed to sophisticated traders using any number of mathematical algorithms and inscrutable techniques to "game" the system? If you want to take a somewhat disturbing look at the reality of modern stock trading, look up information about high-frequency trading or "robo-trading," which accounts for at least half of all the daily trading volume on the New York Stock Exchange.

Do Taxi Drivers Overcharge Business Travelers? One Study Investigates
How to Volunteer for Being a Foster Parent
How to Become a White House Volunteer